First of all, I am desperately trying to get a button installed that you can click to “Follow” our blog. That way, if you would like to be notified of new posts by email, you can just click the button and enter your email address and you will be “subscribed” to my blog and will get email notifications when I update. Should be up shortly…I tried myself and after an hour (trying not to cuss), called in back up (Darrin) who also couldn’t get it to work so we called in the big guns (our friend who is much more computer friendly than us) and still the button evaded us. So, I have resorted to paying someone to do it. She lives in Australia (yes, seriously) so I email with her in the middle of the night when I’m on my Tucker shift, which is when she’s awake. All this to say, stay tuned for the ever elusive “Follow Me” button. I warned you. I am not technically savvy.

Now, on to my post! So we took Tucker for the Infant Apnea study on Monday. We got there at 9:30 and they set us up in the Children’s Same Day Surgery wing, with our own room, fridge, bathroom and TV (which was important since both Monday Night Football and Bachelor Pad finale were on TV that night). When we got in the room we did our normal Operation Sterile wipe down/Lysol sweep. I’m sure they cleaned the room thoroughly before we came. But its habit now. Then the leader of the study came in with a HUGE cart full of stuff. And wires. She proceeded to hook Tucker to 10, (TEN!) leads that would measure his heart rate, breathing rate, oxygen saturations etc. He also had a band around his chest to measure chest effort (how much effort he uses to inflate and deflate his lungs). Then she took the memory card out of our home monitor to download all the data from the last month since we came home.

Our job was to go about our normal routine and simply document the times he ate and stopped eating (this was so they could potentially link any breathing pattern changes to his eating).  The leads are all of course, attached to wires that have to come out of his outfit somewhere. She said, “Now. Since he has so many leads and wires it would be very challenging to change his clothes, so…” this is where I interrupted her and said, “Oh, no don’t worry we won’t change his clothes, he had a bath last night and I put him in something comfortable so he could wear it the whole time.” “Great!” she said. You know what’s coming.

So, she left to download the data and I immediately left Darrin to hang with Tucker and to figure out how to work the TV, and I went downstairs to check out the snack and sweets situation in the cafeteria of this new hospital (the study was done at Levine Children’s Hospital).  When I returned, the director of the study came back in and said she had some good news. By our calculations and alarm count on his home monitor, Tucker has had 6 bradys since being at home. She said, after looking at the data, only one of those was a true brady (heart rate dropping below acceptable level). The others, she said, were either a lead issue (lead not picking up correctly) or she noticed that his low heart rate limit was set at 80 and it should be 70 based on his age-so some of those alarms were him dropping to the mid 80’s which set off the alarm, but is acceptable for his age. She changed the monitor settings to 70 for us for the future. She also had talked to the pulmonary doctor and based on his data, they wanted to try him off his oxygen for the night during the study to see how it would go. So they left the tube in his nose, but cut off the oxygen. And we were ready to start.

We settled in for the 24 hour test. Anytime any of the leads wasn’t picking up, an alarm would go off. Leads don’t pick up well when a baby moves around a lot. Um. Tucker. Still. Not likely. So, the first several hours were maddening with alarms sounding every few minutes. Darrin and I prepared for a LONG night. Then we figured out some tricks to keep the leads from coming loose and things started to get better. Until.  Warning to the faint of heart. Tucker pooped. The kind that doesn’t stay confined to the limits of the diaper. The kind that takes 3 back up diapers and the whole box of wipes. The kind that goes all the way up his back almost to his neck. The kind that ruins his outfit so that it needs to be changed.

Rewind to earlier conversation with study director…’don’t worry, we won’t need to change his clothes.’  45 minutes later. Diaper changed. New pajamas. No more wipes. No less than 25 alarms sounded. Nurse had come in 3 times to see what was going on. We were exhausted. Tucker annoyed. And though I thought it was impossible, the wires were even more tangled and  jumbled up than before.

Thankfully, the rest of the night went well. He did AWESOME without his oxygen. And we didn’t have to change his clothes again 🙂 The next morning, the director came in to download the data-she said it generates 2,000 pages of data-holy moly. She had a preliminary report for us after about an hour-everything looked good. Full report came later that afternoon. They didn’t see evidence of a central nervous system issue that is causing him to have pauses in breathing-great news. They did see a normal amount of  airway obstruction, particularly after he eats. The assumption is that this is the reflux. The BEST news though, is that the pulmonary doctor came in to see us after the prelim report and told us that Tucker can go without his oxygen. For good! We’ll keep it on hand for several months to get us through cold/RSV season in case we need it, but for now-no more tubes taped to his face! And one less attachment which makes us more mobile in the house. So, the only thing he’s attached to now, is his monitor! We will go once a month to this doctor so they can download his home monitor data and he can adjust the plan based on the data.

Here are some pictures from the study. Hope you’re having a good week. Please continue to pray for Tucker to stay healthy throughout  cold/flu/RSV season. Hopefully by next post-you’ll have a “Follow” button to push.. 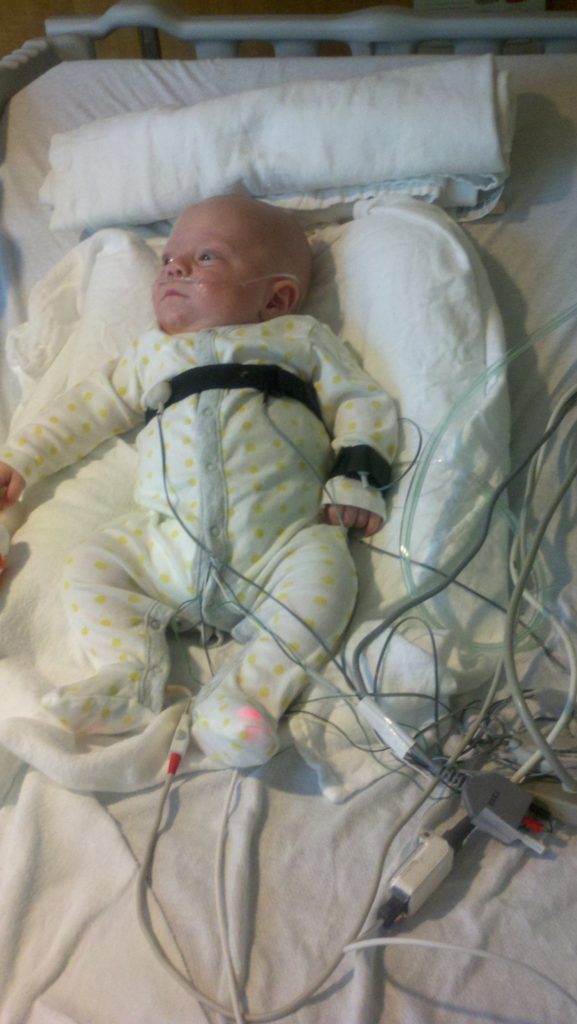 After the ‘incident’. Tucker is clearly annoyed with his parents not-so-smooth 45 minute diaper change. Seriously there are sticker leads all over his chest under his clothes. 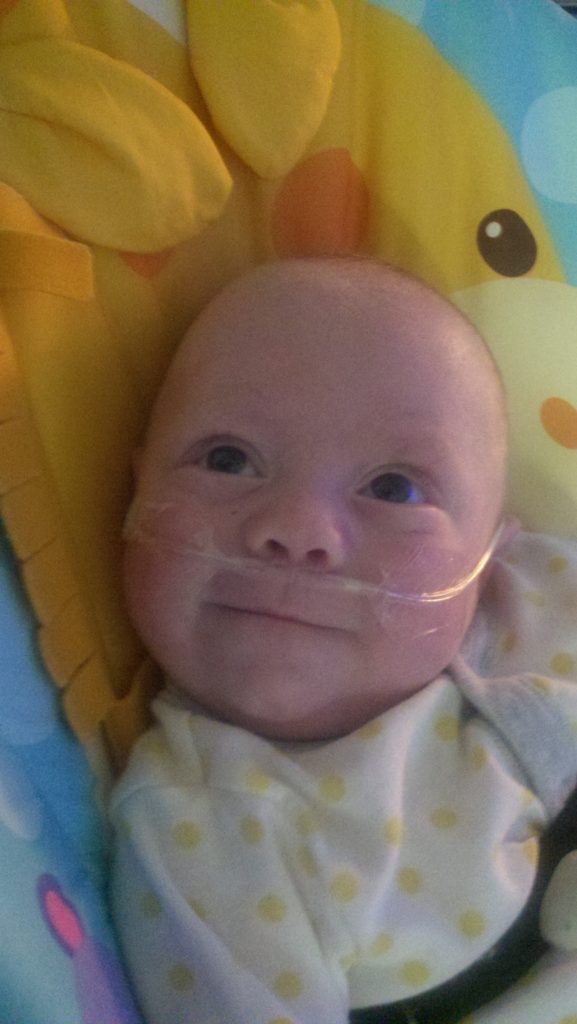 After the doc told Tucker he didn’t have to wear this awful oxygen cannula anymore! 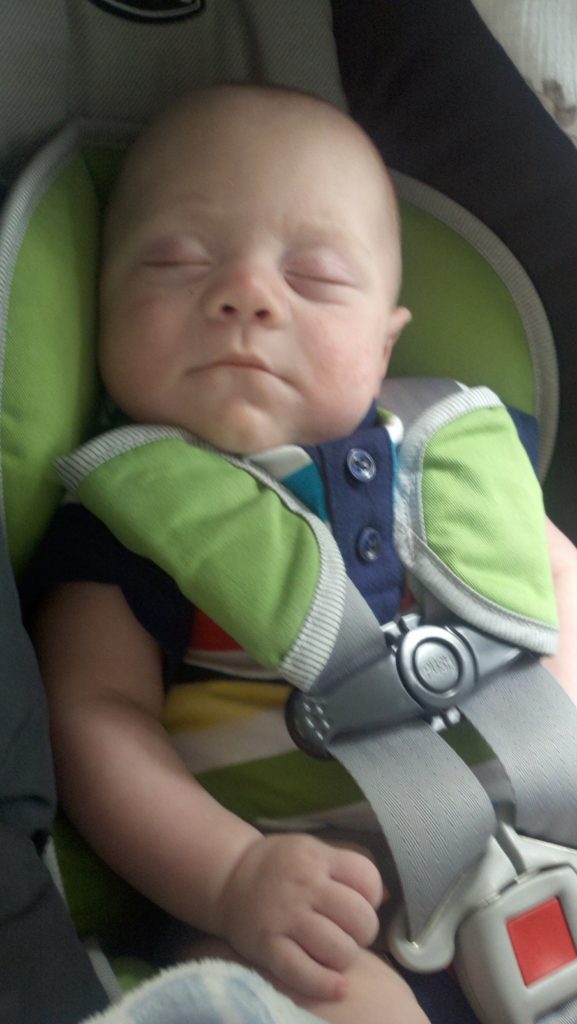 On our way home, oxygen free! Yay for seeing Tucker’s full face all the time now!

« Month One: Training Camp
Eye Exams, Shots and the Amazing Drive By »