The scene: My office after a therapy appointment. I needed to get just a few things done at the office, and his appointment was only 10 minutes away. We live a little less than an hour from my office (and this appointment), so instead of driving him home, then driving back to work, I brilliantly endeavored to take my two year old to the office. My two year old. In the words of Bush the 43rd, this was not my best strategery.

I packed the arsenal. IPAD. Favorite toys. Books. Snacks. Juice Boxes. And just in case there was a complete four alarm emergency, I pulled through Dunkin Donuts en route for 2 “all hands on deck” doughnuts. (One for him. One for me. Duh.) This turned out to be a fatal error in judgment. Not that I got the doughnuts, but that I told him I got the doughnuts. Immediately upon entering the office elevator and continually down the hall to my office he repeatedly exclaimed loudly, “Want doughnuts!” upon no response from me, “I want doughnuts, please!”. The kid has manners.

Only 20 minutes in, I’m a half a doughnut down.

Once settled with Gigglebellies on the Ipad and a doughnut, he was good. I got some emails in, tweaked a spreadsheet. Made a quick call. Thought I was golden. Smooth sailing.  But then he started to get antsy. So, we did a walk around to some office friends to say ‘hi’. He charmed them of course. In between offices though, his volume kept getting louder and louder. “Let’s go this a-way!” “I rode a HORSE today!” (more on this in another post), “Look at that POLAR BEAR!” (Coca-Cola polar bear art). You may know this about toddlers, but when you don’t answer them, they repeat louder and louder their pontification. Because you must not have heard them.

Back in the office (door closed), I look for another video on the IPAD. Thankfully Darrin loaded one of his favorites about animals. Score! Snacks in hand. Plate on desk. Juice box opened. Video playing. I begin typing an email. In the background, I recognize the music from his animal video, but something sounds off. What is it? Tucker looks confused. It doesn’t sound right.

The video is in Spanish. Si.

Stop typing email, find a different video. Safari Animals. Pour more goldfish. Hand him the cow he’s dropped on the floor and is trying to reach. Except that we didn’t bring a cow. Where did he get this cow?? It’s one of those Chick Fil A stuffed cows. We don’t own one. Huh. My kid has evidently swiped a cow from someone’s office that we visited earlier. Sigh. Will figure it out later. New video begins playing. In French. (Not kidding.)

After 15 minutes of listening to a lady name animals in French, we decide to hit the vending machine for a change of scenery and I need a Coke for reals. Armed with more ammunition (namely Famous Amos cookies) we head back down the hall while Tucker loudly names all the animals from our video. He does not understand inside voice. Mostly because he’s never had to use it.

We’ve been here almost 2 hours at this point. I have a meeting scheduled with my boss in 10 minutes. This should go well. I’ll pause here to say my boss is very cool and understanding of family balance. He was a total cheerleader during our whole hospital stay with Tucker, and he has two adorable kids of his own. So I knew he would be ok with an extra guest for our quick meeting. But still.

During said meeting Tucker dropped his entire plate of goldfish and doughnut bites on the floor. Squeezed the mostly full contents of his juicebox onto his shirt. Took every animal toy we brought out of the bag and lined them up two inches from the keyboard I was using, so I knocked them over 47 times. He repeatedly (and loudly) asked me for more doughnuts, after all his were now mashed up ground into the office carpet (and for the love of all things glazed, why didn’t I buy an even dozen?). It wasn’t, though, until I heard a familiar grunting from the short blonde beside me that the story takes a turn for the worst. Thankfully the meeting was close to it’s end, so the odor didn’t totally overwhelm.

1 hour past naptime, and after 15 minutes of clean up, we finally exited the building with Tucker commentating all the way down the hall. “I saw Dr Louise!” “Look at my cow!”  “A cow says mooo.” “A cow makes milk!”  “I smell poop!” “Let’s go this a-way!”

Tucker is very cute and very smart. But it will be quite a while before he visits the office again. I’m still recovering. And I’m a still rookie, two years in. Special thanks to Donna, for letting my son’s act of larceny slide. I will buy you a new cow 🙂 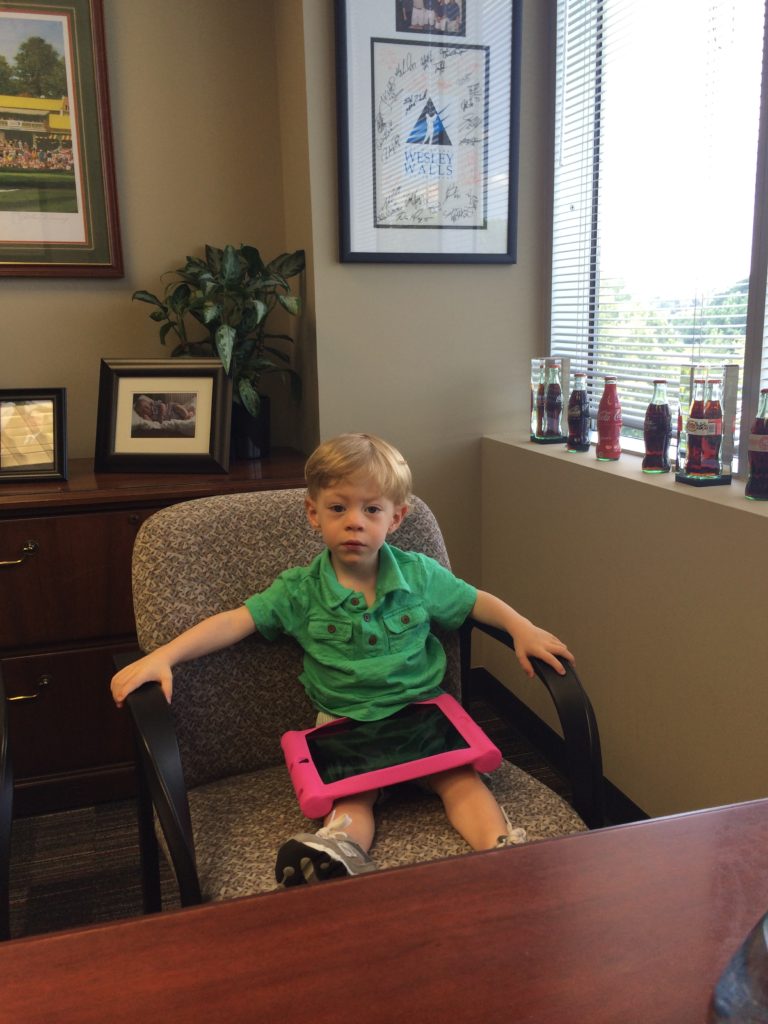 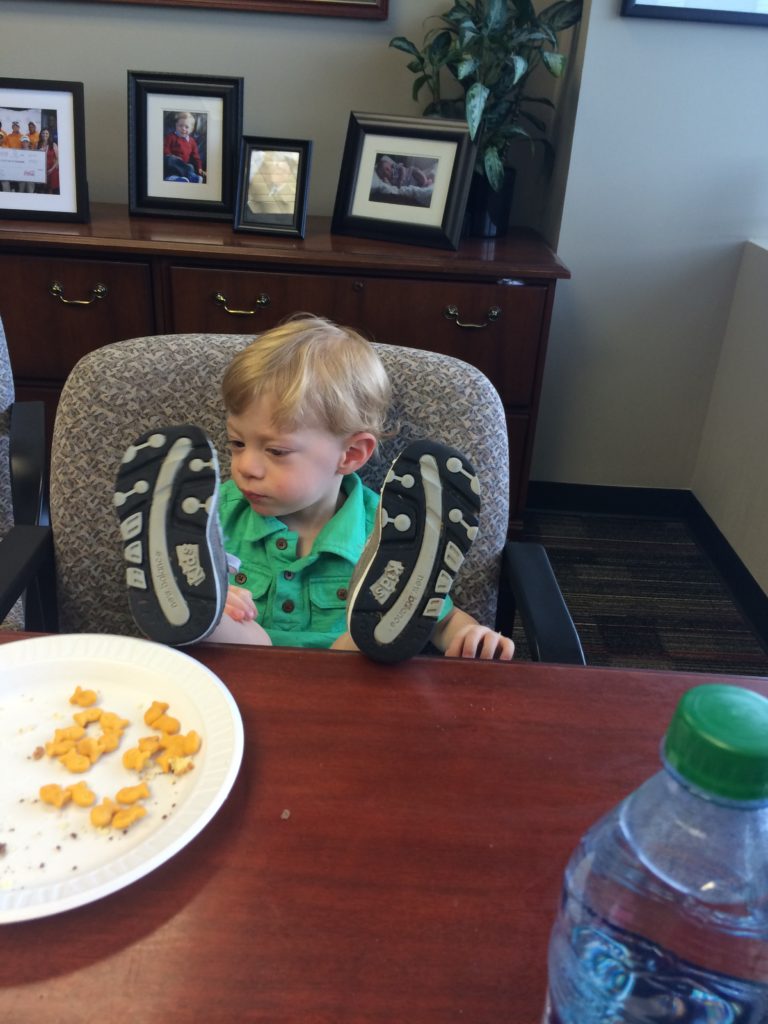 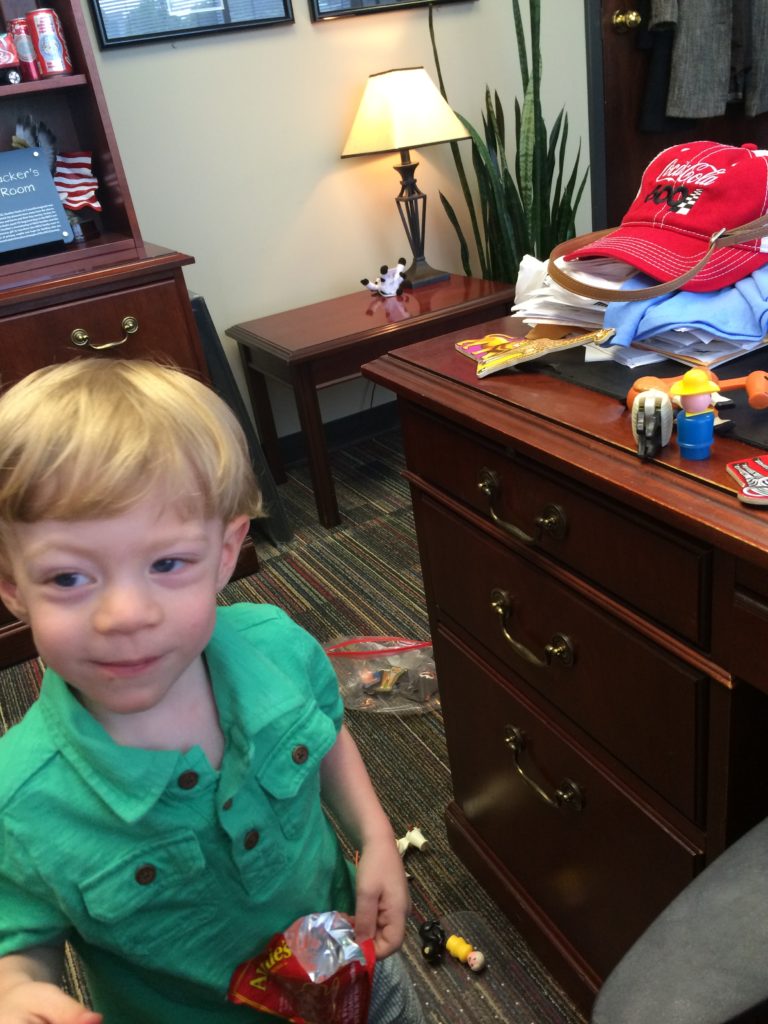 Two hours in. Stolen cow on the table in the background.