On my birthday every year, my mom calls me-around noon usually, and says, ” This was it, 30…(er something) years ago, you arrived! Right at lunchtime! It was the happiest day ever!”. My grandmother usually calls too- she recounts her favorite story from that day-the day she forgot her own telephone number because she was so excited that I finally arrived (I was 8 days late). She went to call my grandad-but in her elation, she couldn’t remember her home telephone number. I can hear, even after 37 years, the excitement and pure joy they felt on the day I was born. They love to recount the story.

I did not get to see Tucker on the day he was born. When the team delivered him, they immediately took him to an adjoining prep room where Darrin got to see him for a minute, while they began working to help him breathe-then they rushed him to the NICU. I had to wait in recovery for several hours before I could go down to the NICU. By the time I was released to go down,  it was after midnight…the day after. I literally didn’t lay eyes on our baby until the day after he was born.

They wheeled me in, still on the hospital bed and lowered his isolette to my eye level. I couldn’t fathom how small he would be. He couldn’t see me, his eyes were still fused shut, not to open for a couple more weeks. Lisa, our nurse that night, told me I could touch him. She said, his red, translucent skin was very fragile and that it actually would hurt him to “rub”, she told me just to reach in, and gently press my finger into the palm of his hand. I opened the portholes. Reached my hand awkwardly in, found his impossibly small hand and pressed gently. His entire hand, all his fingers, clasped around my finger. His fingers couldn’t reach all the way around. But he had a little grip. He was scrappy. I couldn’t utter much through my tears, just a broken “God, please save him.”

Tucker’s 1st birthday is this weekend. I was told by other preemie moms who had been through it, to expect mixed feelings as the day approached. This month leading up to his birthday, like all moms-preemie or not,  brings back memories from the day he was born. That day for us though, unlike many moms and dads,  if I’m being honest-was hands down the scariest day of our lives.

That night. After eating a piece of 7 layer chocolate cake to celebrate making it to 24 weeks, we were feeling optimistic about keeping this baby in for many more weeks. And then the bleeding. The hurried pace of nurses rushing in. One hour of magnesium sulfate that set my insides on fire. The surgery prep that was calculated but obviously emergent in pace. There were a lot of people in the room and I knew that wasn’t normal. Darrin, seeing all that was happening on the other side of the drape, was making his countenance as calm as he could, trying to make me feel as though all was well. We would make it. I knew he was begging God to save us all.

On the teetering brink of having a complete check-out freakout on the table, there was a wave of peace. Not contentment. Not a oh-this-will-turn-out-just-fine moment. Rather, it’s that second you finally reconcile and succumb. What is about to happen is utterly and totally out of your control. You see the tsunami wave coming and your boat’s not big enough. You know the circumstance is dire and urgent and literally life or death. But you recognize momentarily that there is nothing you can do. Your choice is peace or full out lose it.

The day does not bring back  a lot of happy memories. I wish it did. We answered questions on that day like, “how much intervention?”, “do you have a living will?”. Questions I never dreamed we would answer on the day our baby was born. I grieve the excited, happy anticipation that a healthy birth brings.

It was scary. And really hard. And terrifying-did I say that already?

Like many births, our family and friends were huddled together in a room, waiting on news of the impending delivery. They did not have balloons. Or flowers. They were called urgently there with phrases like, “She’s bleeding again”, “They’re saying NOW” and “Emergency C-section”.  They were praying, pleading for Tucker (who was yet un-named) to survive. It had to have been intense for them. It was intense for us.

The day wasn’t totally without joy, please know that. When he made it, when I made it, through delivery…well, that was a overly joyful moment. He battled through delivery to stake a claim to being in the world. And then the muffled sound. This kid, whose lungs were severely underdeveloped still somehow let out a pitiful and beautiful cry when they lifted him from my belly, 4 months too soon. That one, barely audible cry let us know that he survived the delivery-he was, at that moment, alive and it was the only time that day that the tears we shed were for joy and not fear.

That is what I’ll call and tell him about every year on his birthday.

As we approach his birthday, I am finding that the tally count for happy thoughts is filling up WAY quicker than the count for hard-to-go-back-and-relive scary memories. I am so grateful for that. Tucker has a hard birth story. He won’t remember it-ever. I’ll remember it always. There are mixed emotions on his first birthday. His birth didn’t go like I thought. It’s hard to relive. The day was frightening, chaotic and panicked. And somehow ordained. It’s how his story begins. Can’t be changed. I needed to find the happy from the scariest day in my life.

Once I let myself really dig through the grief and emotionally charged recollection of the day he was born, I pulled from the rubble a moment, a sliver of joy in that day. And I grabbed it. I’m holding on tight and won’t let anything, no other memory from that day, wrench it out of my tight fisted hand. In the midst of all the hard there was triumph. And a gift. Tucker’s grit and declaration of life is the greatest moment from those 24 hours. This is the story I’ll tell him. When I call him every year on his birthday, the conversation will go like this:

Happy Birthday butter bean! (no trust me, he will still love this nickname when he’s 32, I’m positive). I remember this day so clearly! You gave us the mightiest cry when you were born-it was like a really tiny lion cub, barely audible but SO strong. This was the day buddy. This was the day you teamed up with the Creator of the universe and said, “Life? I’m in. Let’s Do This.”

“Have I not commanded you? Be strong and courageous! Do not tremble or be dismayed, for the LORD your God is with you wherever you go.” Joshua 1:9 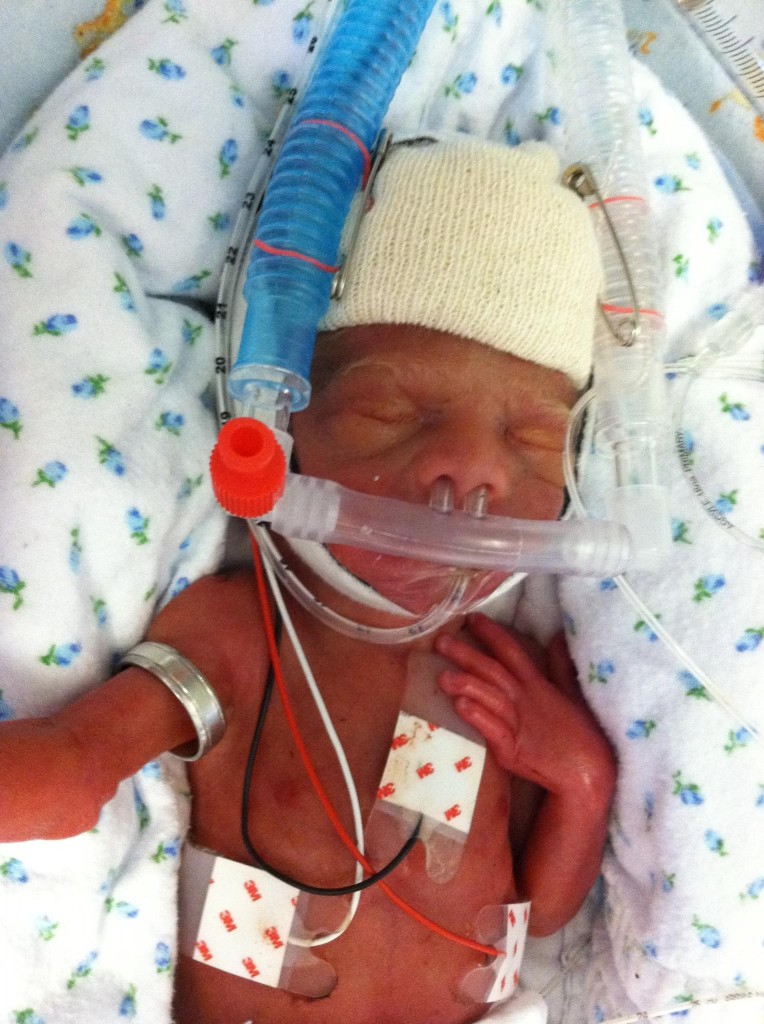 The day after Tucker was born. That is Darrin’s wedding ring on his upper arm. His skin was so red those first days. 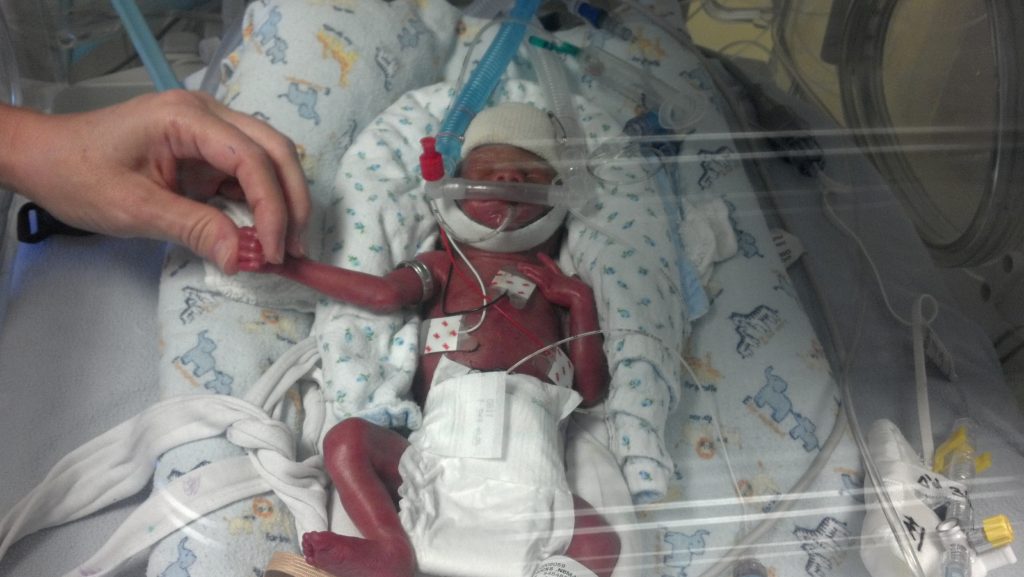 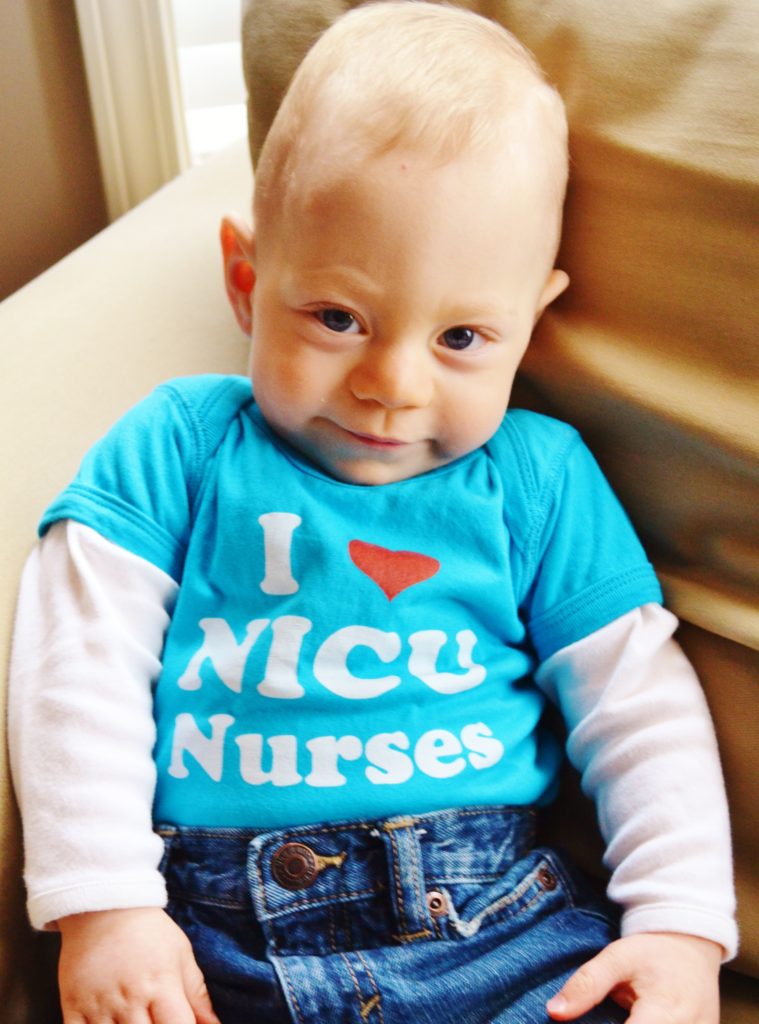 We owe so much to our NICU nurses. Especially Tucker’s primaries: Carmen, Kayla, Courtney, Elaine, Lissa and Samantha. 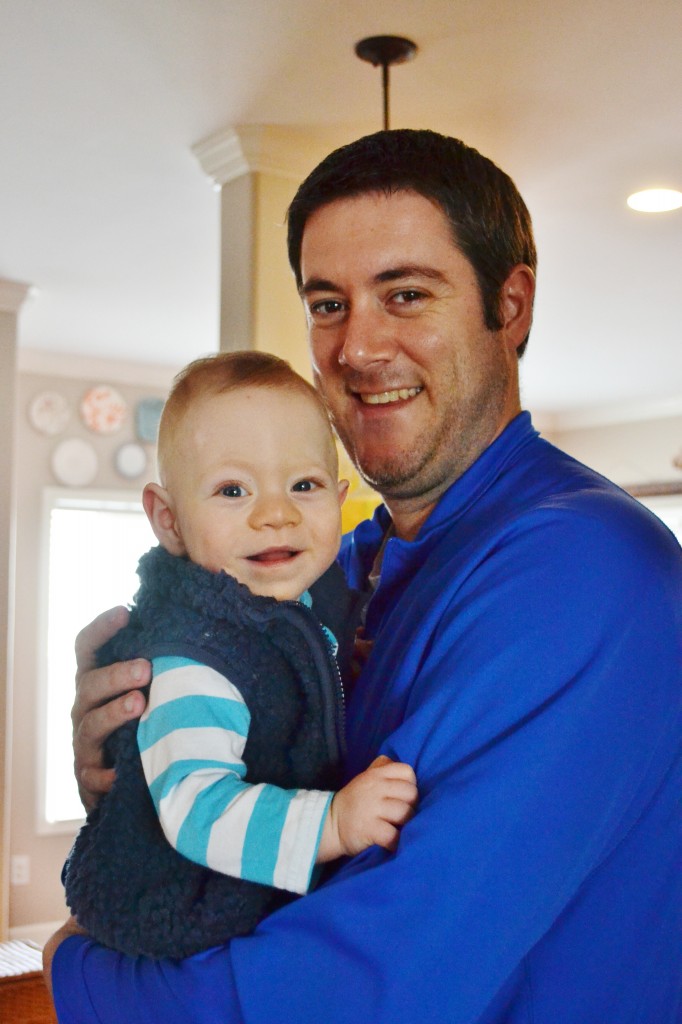 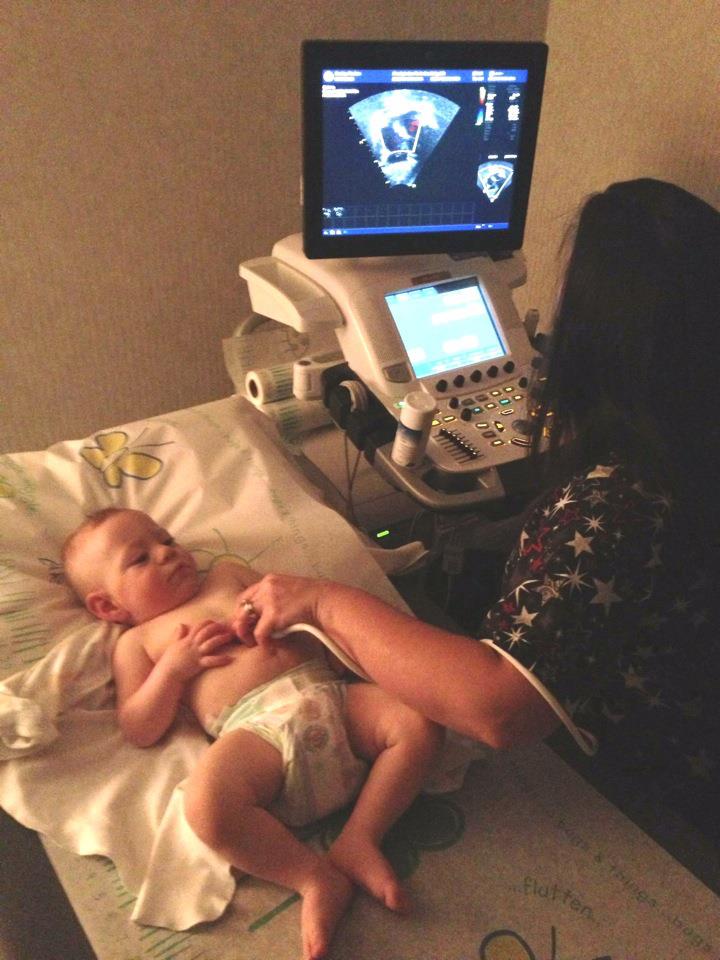 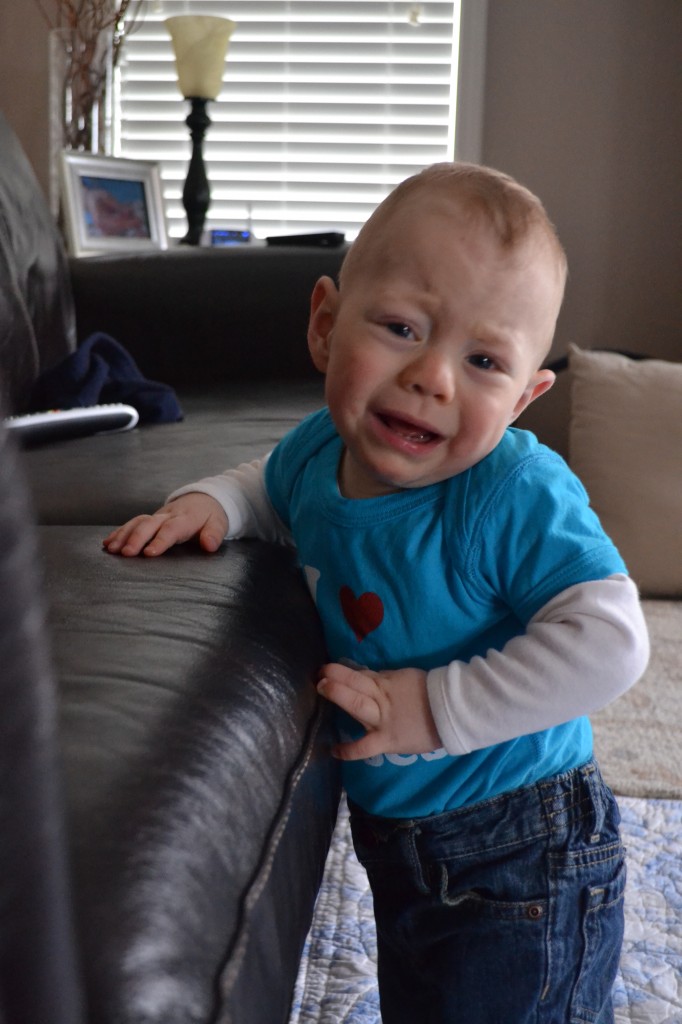 Um, yeah so remember how I told you Tucker was cutting 3 teeth? Silly me. Tucker is actually cutting S.I.X. teeth. 4 up top, 2 down below. 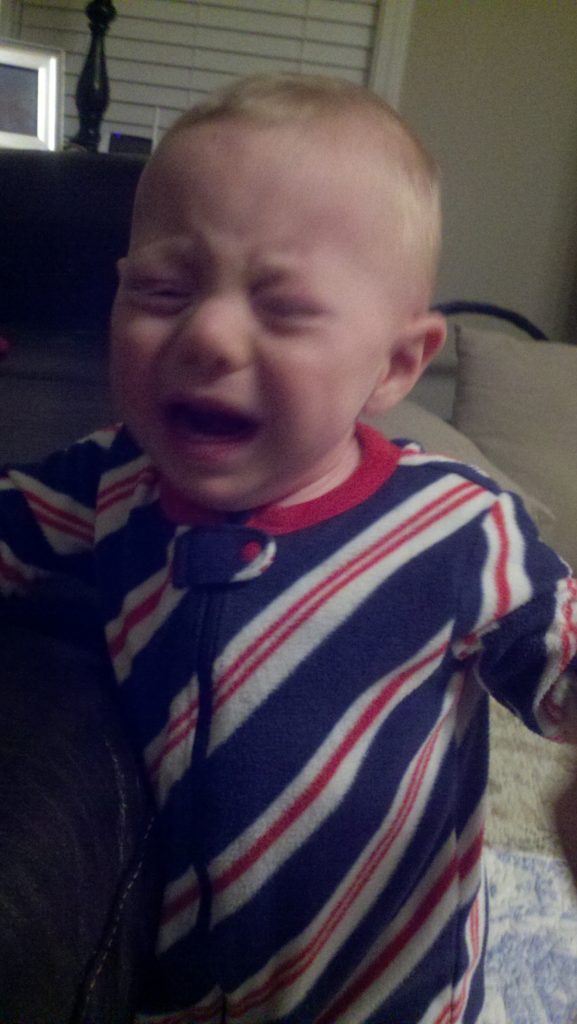