We rounded the corner after scrubbing in for the obligatory 3 minutes. As we neared the fourth pod, I saw that the neonatologist was sitting on a stool right beside Tucker’s isolette. We were only 4 days new to the NICU experience. But I knew enough to know that if the neonatologist was camped out at our isolette, it probably wasn’t good news. We walked up and I peered in at the teeny 1 pounder. The impossibly small human behind the plexiglass was jerking his twig thin leg, in an unnatural movement, his underdeveloped nervous system still trying to reconcile that he was outside the womb. My mind was trying to reconcile the same thing.

The neo explained that in the last hour, Tucker had 5 “events”. And events, we came to learn, were no bueno. His heart rate was dropping too low, and he wasn’t breathing. Stopping for way too long before breaths. The doctor’s first guess, and hope was that he needed blood. Blood. He needs blood? It wasn’t something I had ever considered. That my newborn, within 4 days of life, would need a blood transfusion. Within minutes of the doctor’s proclamation though, Tucker’s hematocrit numbers came back and sure enough, he needed the first of many blood transfusions.

I wrote the same intro above, for a post over at Preemie Babies 101 about how significant blood transfusions are in the NICU. As I was writing it, a little voice in my head kept nagging me. Obliging the voice, I walked down the hall and hit A-5 on the vending machine. After the 5th Oreo, it became clear that I had listened to the wrong voice. This wasn’t the ‘sweets-solve-all-problems’ voice. It was the ‘what-are-you-doing-with-your-life?’ voice.

I hate it when I get those two mixed up.

What I was feeling was a little bit of good old fashioned conviction. What I knew as I typed that post for P101, was that I had not made good on a promise. A promise I made in the NICU after one of Tucker’s 6 blood transfusions. The transfusions took several hours, which provided a good amount of time to think about what was happening. So we watched and held him as the blood from another human being traveled throughout our son’s little body bringing vibrant, healthy red blood cells.

You could literally see his skin turning from pale gray to happy pink. And the days after? The alarms would stop sounding. His 02 saturations would soar. The feisty spirit he needed to grow and fight infection would return. This blood, y’all, it saved his life. Dramatics aside. And so I whispered a promise in my head and in my heart, that when we left that place, I would do the same thing that 6 unknown-to-me humans had done for me.

I would become a blood donor.

I had never given blood. Never. I barely thought about the Red Cross. Maybe during a natural disaster, probably on 9-11, but never had I seriously considered giving my blood to another human. And so the voice (not Oreo voice, Do Something voice), was reminding me that I needed to make good. I went to the Red Cross homepage, found the closest blood center, and made an appointment online. It took 5 minutes. My appointment was the following week.

I got there and happily announced that I was a first time donor. Aside from the receptionist, no one else in the waiting room even looked up (note to self: take it down a few notches, Hucks). I did though, proudly peel off and sport the “First Time Donor” sticker. The rest of the day. They took a little droplet of blood to make sure I could give that day, mostly making sure I wasn’t anemic. Clearly they didn’t want to peel my sturdy hips off the floor. After about 10 minutes of a quick computer questionnaire, I was in! Easy peasy.

The donation itself took about 20 minutes and for me, was totally fine. I will say, God gave me the fear of spiders and not needles, so thankfully this wasn’t a huge deal. I took everything in. I watched the people around me. They had different skin colors, some were old, one was in college, the room pretty evenly split between men and women. I giggled when the nurse asked one of the older men which arm he wanted to use. His eyes danced and he said, “Better do my left, otherwise I’ll lose my arm wrestling match tonight”, and winked in my direction. The college kid was on his phone, maybe taking pictures of his shoes-not sure. They knew some of the technicians, showing me that they had been many times before.

In my reflection and observation in those 20 minutes (and quite unexpectedly), I came to understand how significant these people were to my family, and will be to others.  These are the ones. These are the people that walk into blood donation centers every month. They have no idea. Does this 80 year old man know that his blood saves the lives of itty babies in the NICU right down the street? Do they know that our son is alive because they (likely without a significant reason like me) walked through a door with a big red cross on it?  Were they there because of a life altering event from their past? Probably not. They were there because their “Do Something” voice was louder than mine. Or maybe they’re just better listeners.

I was nearing the end of my donation time and thinking of Tucker’s life and how impactful these people were to our family, without even knowing it. I had not planned to do it. But that darn voice. And so, as I got up to leave the donation area, I decided to tell them. All Norma Rae style, I told them that 2 years ago, we had a baby in the NICU who desperately needed blood and that the 6 transfusions he had saved his life. That people like THEM, saved his life. I started crying in the middle of my speech (endearing to some, might have freaked out the college kid). Mercifully, it was a short speech and they were gracious and happy that I told them.

I retreated to the cookie table only a little mortified. I was mostly grateful. That people more selfless than me, didn’t need a reason to give blood. They just did. Because it would help. So, if you’ve ever thought of donating blood and if you’re comfortable with the idea, you should totally consider it. It works because it’s the one qualifier to being human. No matter our ethnicity, age, gender, religious beliefs or cookie preference, we all need it to live. And we all have it in common. God’s cool like that. Tucker and babies in NICU’s all over this country are alive because someone gave blood. I will do it again. Even without the voice next time. 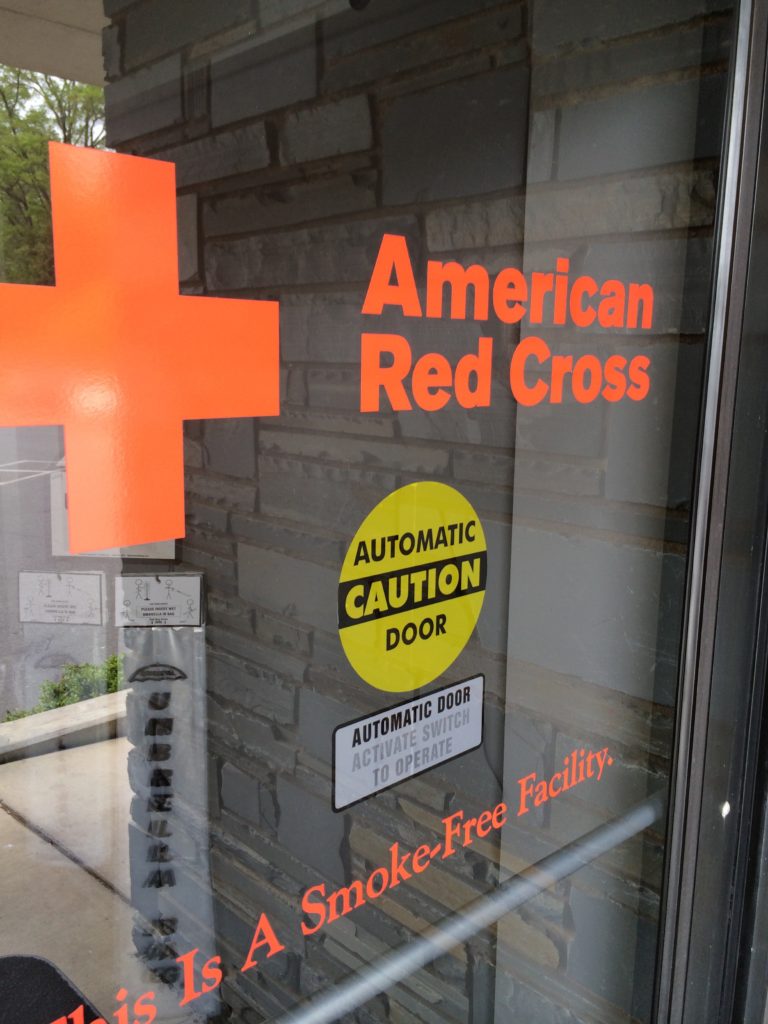 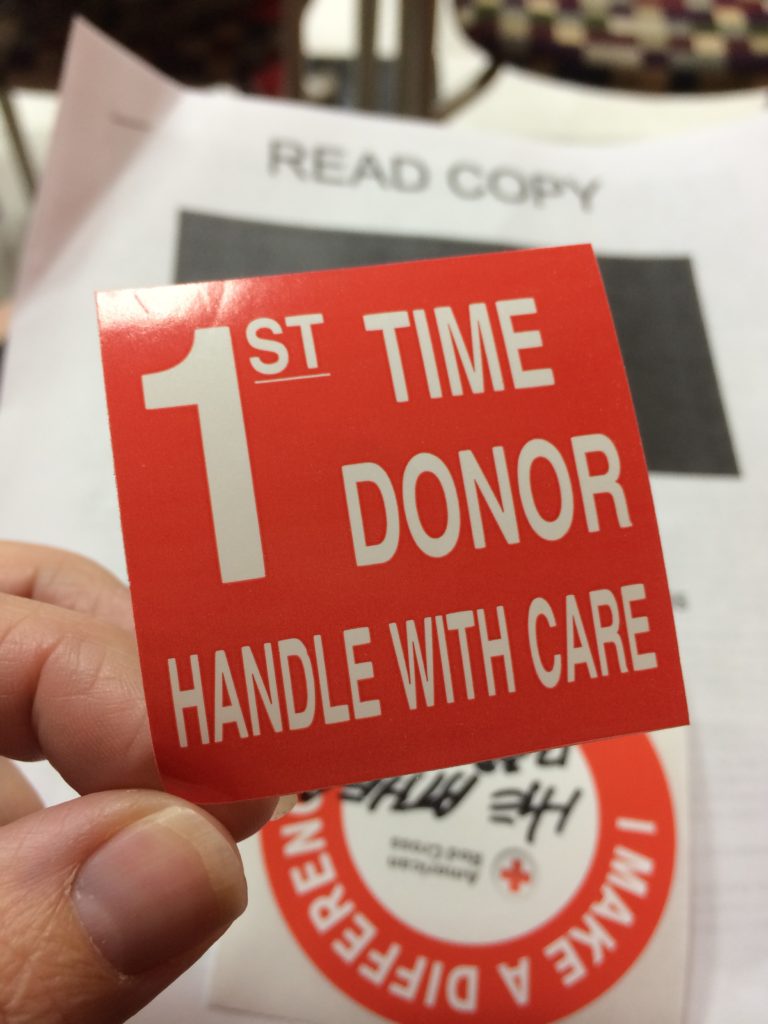 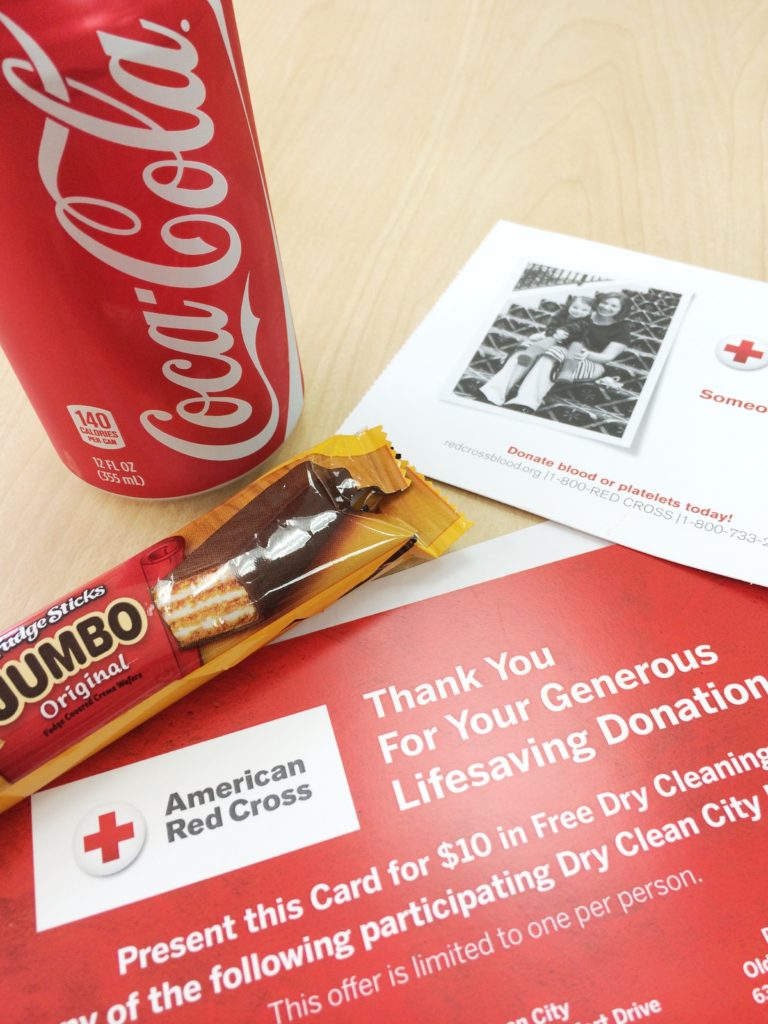