6 month shots. Done-zo. Tucker did great, much better than the last two sets of immunizations. We kept him on the trusty oxygen for the night before and the night after he got the shots. He didn’t have any brady/apnea events (thank you Lord) and he wasn’t overly fussy. He definitely felt puny and ran a little fever but that is nothing compared to how his last few immunizations rocked him. Thank you for praying.

This week we have two appointments. His gastroenterology appointment and…shhhh. His circumcision. He was just too small and fragile in the NICU to have this done and it was always something we could do outpatient. Since we’ve been home, we try to limit his doctor appointments to two a week-it’s just too much for him (and us) to do more than two a week. Plus, with a victory drive through run after every successful appointment, my hips just couldn’t handle more. We’ve had other higher priority appointments to make and this one got moved to the back of the line. But. It’s time. So pray for both appointments. His reflux seems to be a little better but he still gags and chokes quite a bit. Don’t know that there’s much the GI doc can do about this but we’ll see.

So, here’s a little lesson in preemie world. When preemies are in the NICU, doctors measure their age gestationally…in other words-Tucker was a 24 weeker, meaning he was born at 24 weeks gestation (full term is 40). And after he was born, in the NICU, when referring to his age, they simply tacked on the weeks he should have been if he were still in my belly. So, 2 weeks after he was born, he wasn’t labeled a “2 week old” he was labeled “26 weeks”. That is, until his due date. Once a preemie hits their due date, they are labeled based on an “adjusted” or “corrected” age. So, once he passed his due date mark of June 29th, he was “1 week adjusted, 2 weeks adjusted” etc. So, while technically at this point in the game, Tucker is  close to 7 months old-his adjusted age is 3 months. From now until the time he is 3-4 years old ALL of his milestones are measured by his adjusted age not his actual age. The only time his actual age is taken into consideration is for his immunizations-he gets those based on actual, not adjusted.

Ok, so I tell you all of that so that when I talk about the awesome things Tucker is doing, you can know that he’s on schedule for his adjusted age-not terribly behind. Micro preemies (babies born before 26 weeks gestation) like Tucker, have the most ground to make up in terms of development. The majority of the third trimester of a pregnancy is spent developing two things: Brain and Lungs. So, when a baby makes this early of an entrance, those are the two places he/she suffers most.

No one can know the developmental outcomes for a micro preemie until they reach about 5 years old. If, along the way, they hit all of their milestones on time with their adjusted age, then you can feel more confident that the child won’t have many developmental issues as a result of the severe prematurity. We have an Early Intervention case worker who comes to the house on a regular basis (about once a month) to assess his development and to see where he lands. We’ll have this service until he’s 3. He had his first assessment several weeks after discharge and he is tracking where he should be for a 1-3 month old-thank you Lord squared. She also gives us an individualized plan for Tucker so we can work on hitting his next milestones.

One of the milestones we have been on the lookout for is rolling over. When we went to the pediatrician this week-she began to put him on his belly and explained, “I’m going to see how his arm strength is here, see if he can push up, see if he can roll over”. Being the oh-so-on-top-of-it mother, I quickly interjected “Ok, yes, he can push up great, but he doesn’t roll over yet”. And wait for it. Yep-this is the time our son chose to look up at Darrin and me (on pushed up arms) and roll his happy little behind right on over to his back. Not once. But twice. Seriously, he is such a show off.

So, here you go. Like Tina Turner, we’re rollin’. Live, from Concord, NC at 13.3 pounds, with more turnovers than Cam Newton and the Panthers…our boy, Tucker.

Hope your weekend was great. Sorry if you’re a Clemson fan or a Panthers fan. Rough weekend. But we still hold out hope for Cam and the Cats-we can turn this thing around.

“Whoever believes in me, as the Scripture has said, ‘Out of his heart will flow rivers of living water.” John 7:38 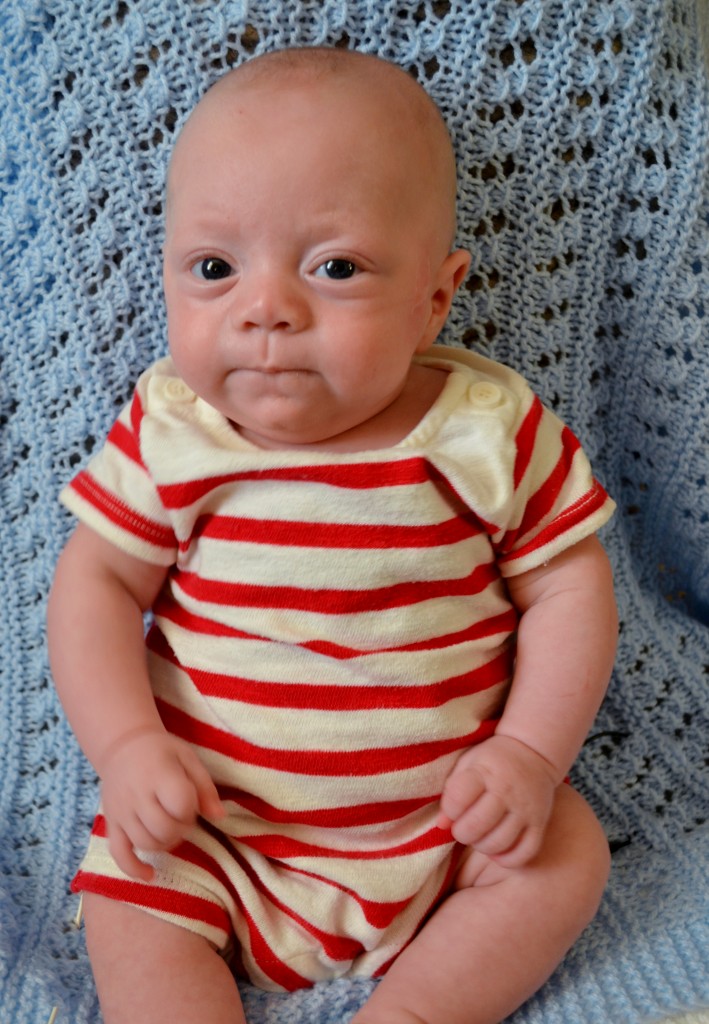 « Eye Exams, Shots and the Amazing Drive By
Crying at the Stoplights »