“For the moment all discipline seems painful rather than pleasant, but later it yields the peaceful fruit of righteousness to those who have been trained by it.” Hebrews 12:11

I don’t like running. My body’s not made for it. I think my body is literally surprised (sometimes downright offended) when I pull on the lycra-climate-cooled-micro-fiber-aerodynamic running gear. No matter how cute it looked on the mannequin. And so my body was pretty confident that I was joking when 3 years ago, as I watched an episode of the tear-enducing  Biggest Loser and declared “After I have a baby, I’m running a half marathon.”  No matter that I was eating my 3rd chocolate chip cookie with this declaration. Not to mention that I had never run more than 3 miles in a row, ever.

And so here I was. 3 years later. After one ridiculously stressful year of NICU preemie world. Looking at the shiny new treadmill in our once office. 65 pounds heavier than when I made the half marathon threat on the couch 3 years ago. I took a day or two and hurled insults at myself for letting it get so out of hand. And then I sucked it up. And I (gasp) put in print my half marathon goal: Sturdy Girls Unite.

Then I did what everyone does when they set out to accomplish a seemingly easy but truthfully nearly impossible goal. I started a Pinterest board (link here). All things running. What would I need to do this half marathon? What songs should I download for my running playlist? What’s the best training plan? Should I run/walk or run the whole time? And most importantly, what would the color theme be for my outfit?

I also knew I couldn’t do this on my own-I needed to sucker some other ‘not-runners’ into helping me stay on track. Girls who would make me stay the course. Enter Rachel and Sandy. And so, the first ever meeting of the Sturdy Girls Unite running club began in February. Our goal: Downhill at Dawn Half Marathon. We had four months.

I should mention here that I had not done one single ounce of physical activity since becoming pregnant with Tucker. Nothing. Zip. Zero exercise in over 17 months.  And it was February. Translation: C-O-L-D. I found the training plan and did my first run-1 mile. The wheezing and force with which I clomped along on the belt told me quite immediately that running the whole 13 miles would be out of the question. So I landed on a run/walk plan. Run 4 minutes, walk 1 minute. Repeat.

Somehow I managed to stay on track. Pun intended. I found the time to get a couple short runs in and the once weekly long runs, tacking on miles each week. I started on the treadmill and in an weird way found that watching Seasons 1 and 2 of Downton Abbey on the IPAD made the time go quickly-(no commercials!). The downside to Downton was that I did, on occasion, look around for my footman or butler to bring me water. Darrin was not obliged. Eventually I made my way on actual pavement and started feeling like a real runner, sort of.  Make no mistake, I whined a good bit. I sent at least a  dozen texts to the girls which started like this: “I’m done.” Or “What was I thinking?” or “There’s no way I can do this.” And my favorite, “I think my pants just caught fire from the constant friction.” But I kept going. Mostly because I had already paid the $60 entry fee.

The morning of the race, I was up at 4 a.m. I prayed for a bit, ate my protein bar, clipped on my water bottle belt (because that’s not dorky), qued up my playlist and went to find the other two “Sturdy Girls Unite” tshirts at the start line. The race, as the name implies, started at dawn. The intent was to watch the sun rise, and take in the beauty of the mountains as you ran the course.

I started the race towards the back, and after mile 1 was in 422 nd position. Of 423. Didn’t matter though-I was feeling good. After mile 3, I was ready for my first sip of water. No water stop in sight. But no worries, because I had my handy dandy water bottle belt. In hot pink no less. The belt is essentially a large elastic band with holsters to carry little water bottles.  I had adjusted the belt at the beginning of the race because it was too loose, so I shoved it down lower, so it was snuggly wrapped around my hips. No chance of it being too loose there. So, I reached back to grab the bottle. It wasn’t there. “Don’t panic-you’ve got another one on the other side”, so I reached for it. Nothing. Both water bottles gone. Evidently, I had misjudged just how much my hips moved when I ran. The movement of my lovely lady humps had managed to wriggle the water bottles out of their holsters to be lost somewhere along mile 2. Sigh.

Luckily my husband was at mile 3 cheering me on so I took off the ever so trendy belt and handed it to him. Somewhere around mile 4 I saw a guy running towards me.  In the wrong direction. Had he lost his water bottle too? Was he looking for that Porta-Jon we just passed? Wow, he’s running at quite a clip. Wait. There’s someone behind him. In fact, there’s several people behind him, all running towards me? It was then that I realized that somewhere ahead of me was a turn-around point in the race. The course evidently was taking everyone back up this road for this portion of the race. More and more runners ran past me in the opposite direction. Hundreds actually.

At first I was embarassed. I had passed a few folks but was still definitely one of the last runners. But then something happened. The runners that were in the lead, the one’s passing me as they ran towards me? They were smiling. And clapping. And high fiving those of us at the back of the pack. Not even halfway into the race, they weren’t worried about focus, or time, or pace. They were cheering us slow pokes on, even as they ran. It was really nice to experience. I realized in that moment that runners? Are pretty darn like-able. They were genuinely happy to see us there, participating in this running thing that brings them so much joy. And they stayed at the finish line too- cheering even louder. Long after they had finished their race.

And so, two hours and fifty eight minutes after I started the race, I crossed the Finish Line. It was hard. My Ipod died at Mile 10 so I had nothing but the sound of my breathing and the occasional car to keep me company. I turned my ankle at mile 6. And I walked almost all of mile 12. But I finished. And I got a medal. And I wasn’t last. But I would have been just fine if I had been. The goal was to finish. And my sturdy thighs started at mile 1 and didn’t stop until mile 13.1. I learned about my capabilities. I learned about drive. I learned about follow through. I learned that runners aren’t completely crazy. And they’re nice.  I learned about accountability. Oh, and I learned not to wear elastic belts down around my hips.

It was a good day. And I was proud. I still don’t find exhilaration or true joy in running. But I can appreciate that for some, it exists. Thank you runners, for sharing the road with me. And making me believe that 13.1 miles was something that a sturdy girl could not only do, but rock.

Special thank you to Sandy, Rachel and my husband who more than once had to talk me back into the running shoes. You supported me all the way, you are awesome. And thank you to Pink, Cool and the Gang, David Crowder, Justin Timberlake, Bon Jovi, Aerosmith, Lady Antebellum and (cringe here) Britany Spears for singing in my ears for almost every step.

P.S.Here is the training plan I used: http://www.halfmarathons.net/training_tips_schedule_20_weeks.html. I also used Jeff Galloway’s app to help me keep pace and tell me when to walk/run. 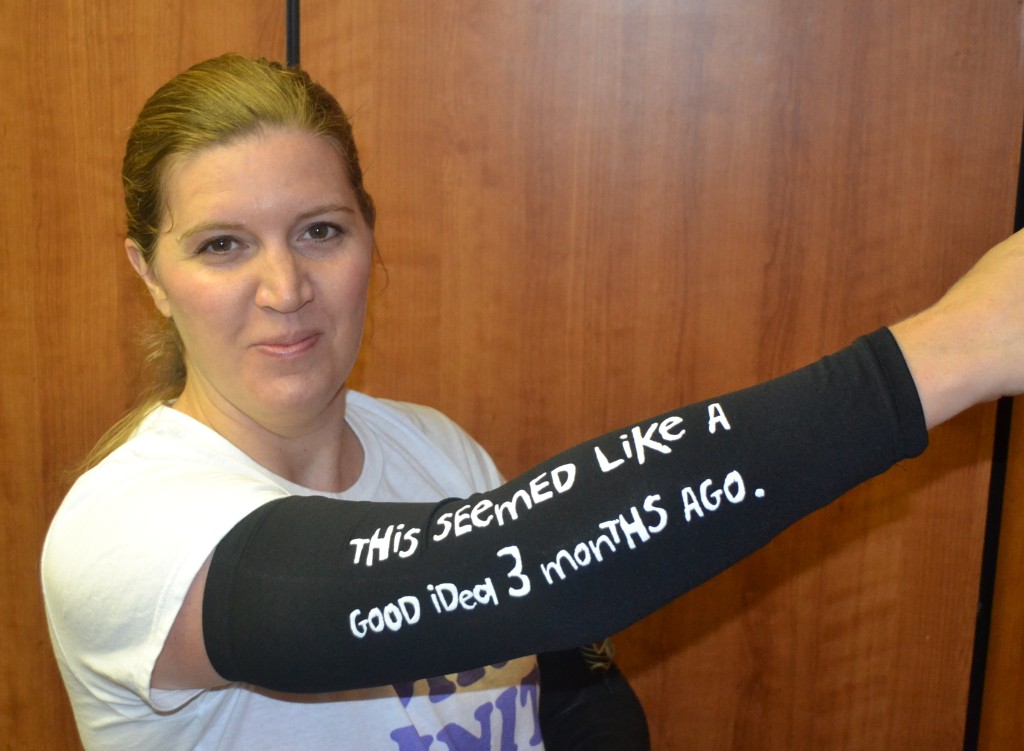 Thank you Ashley, for these super awesome arm warmers. 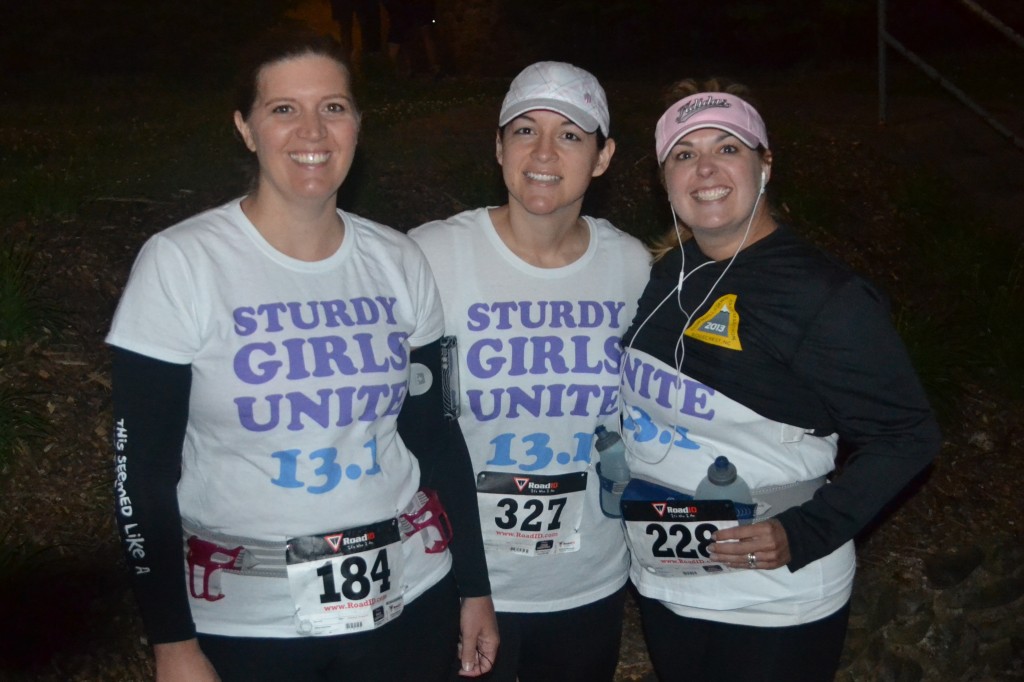 I’d run anywhere with these girls. 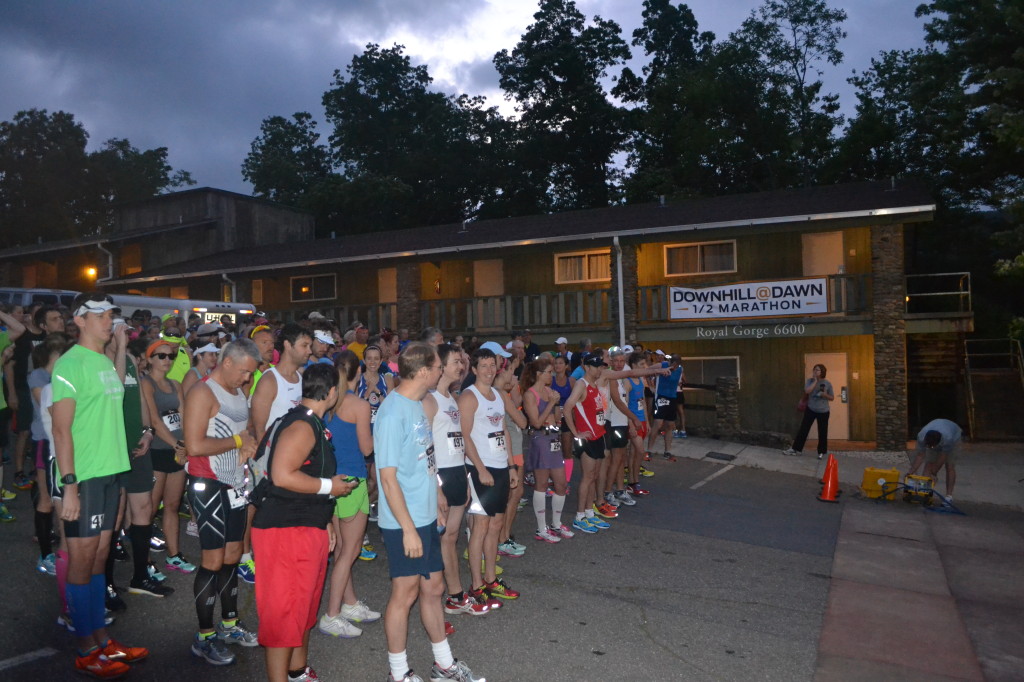 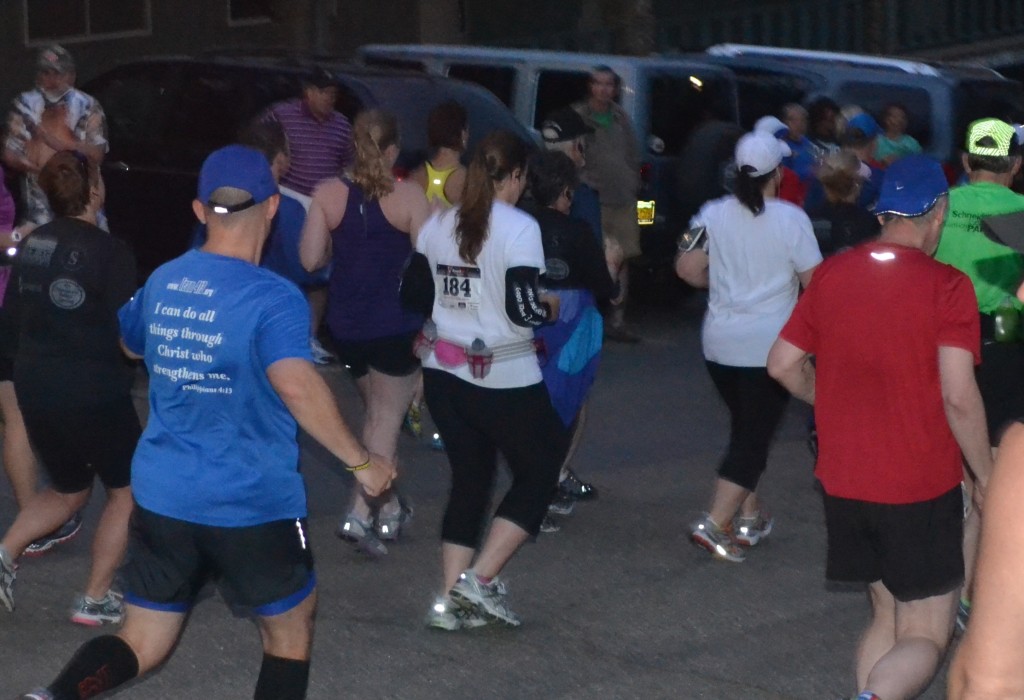 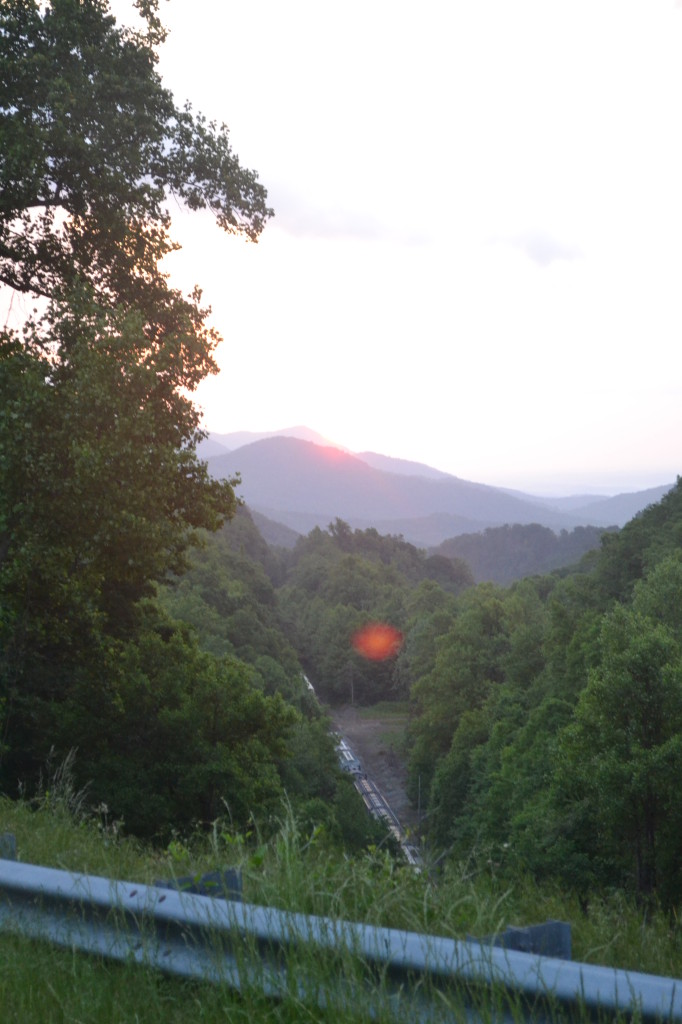 It really was a beautiful run. 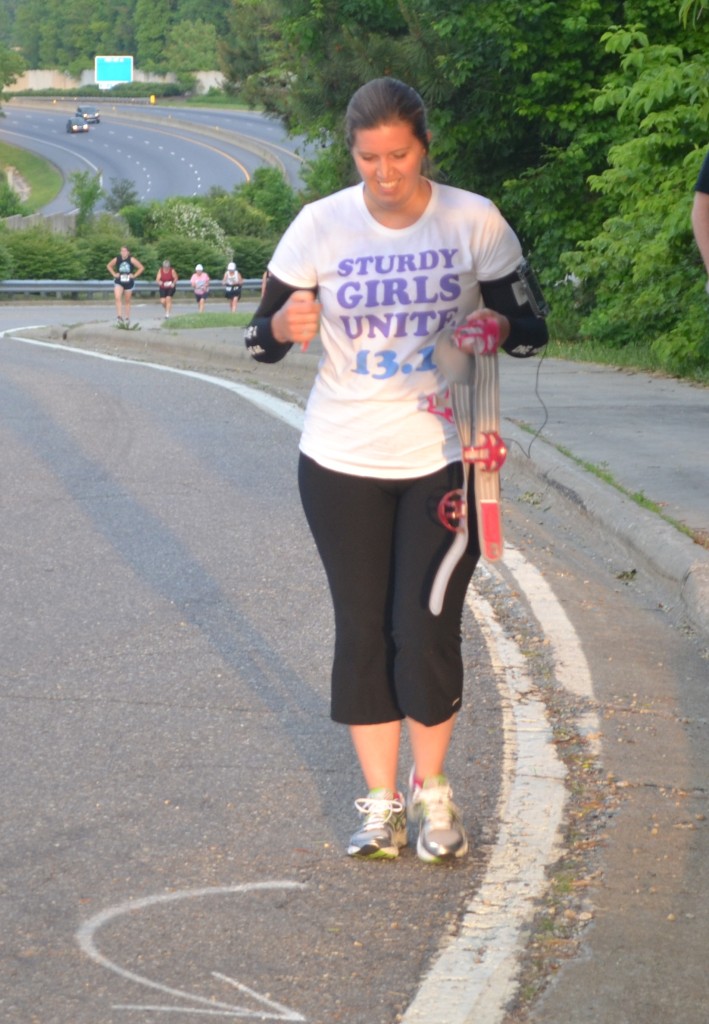 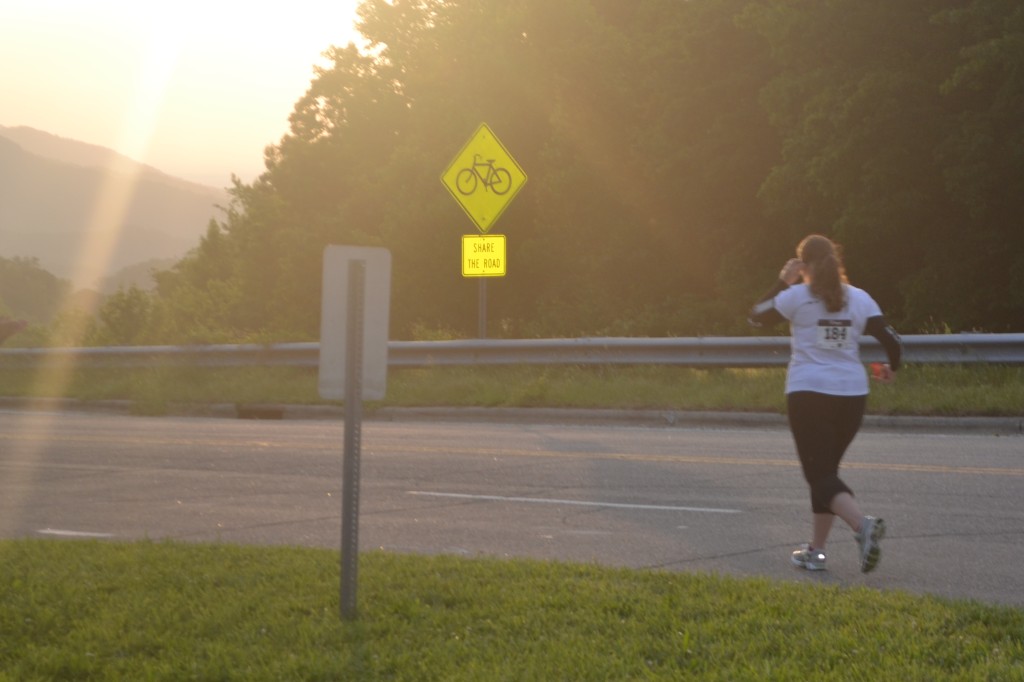 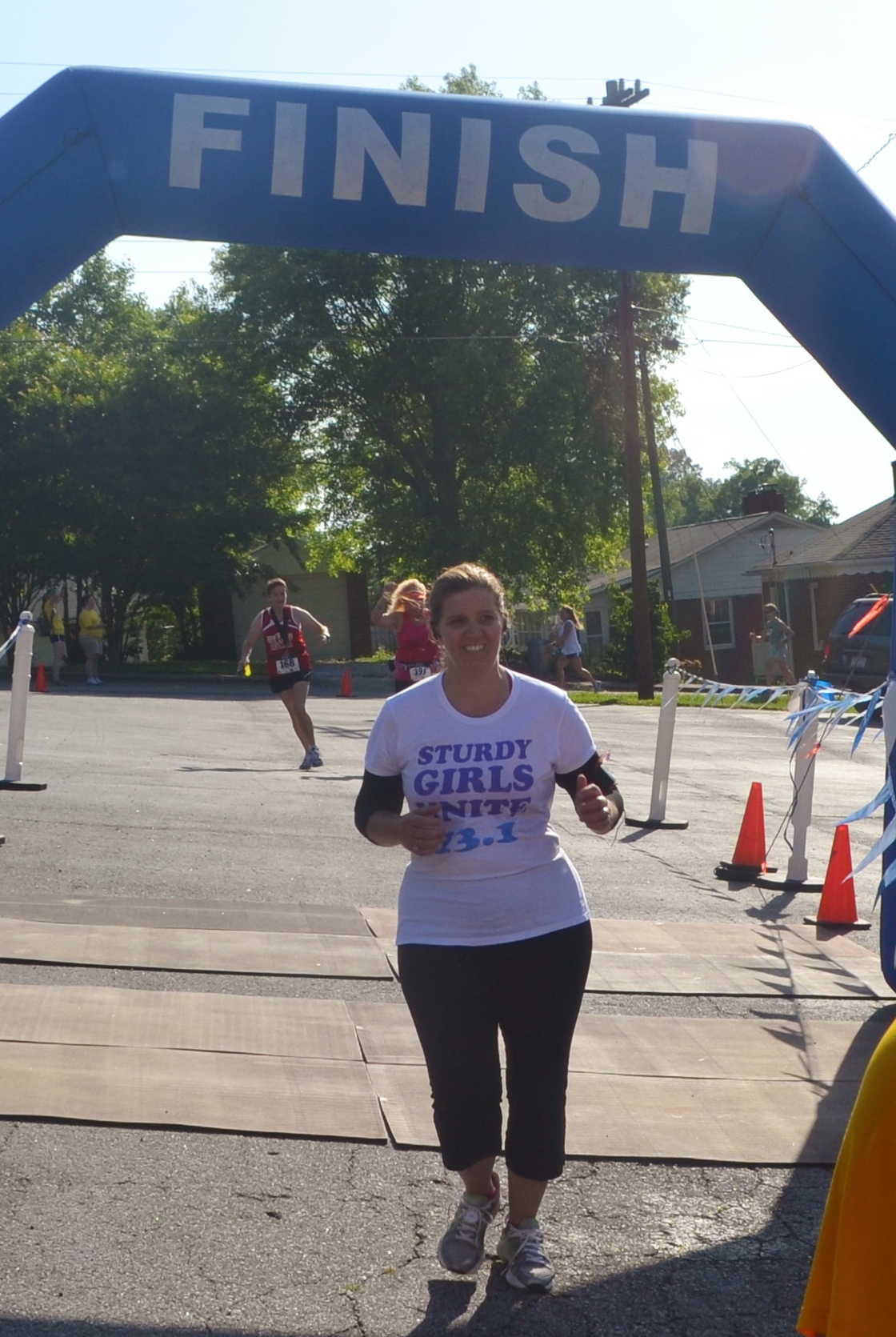 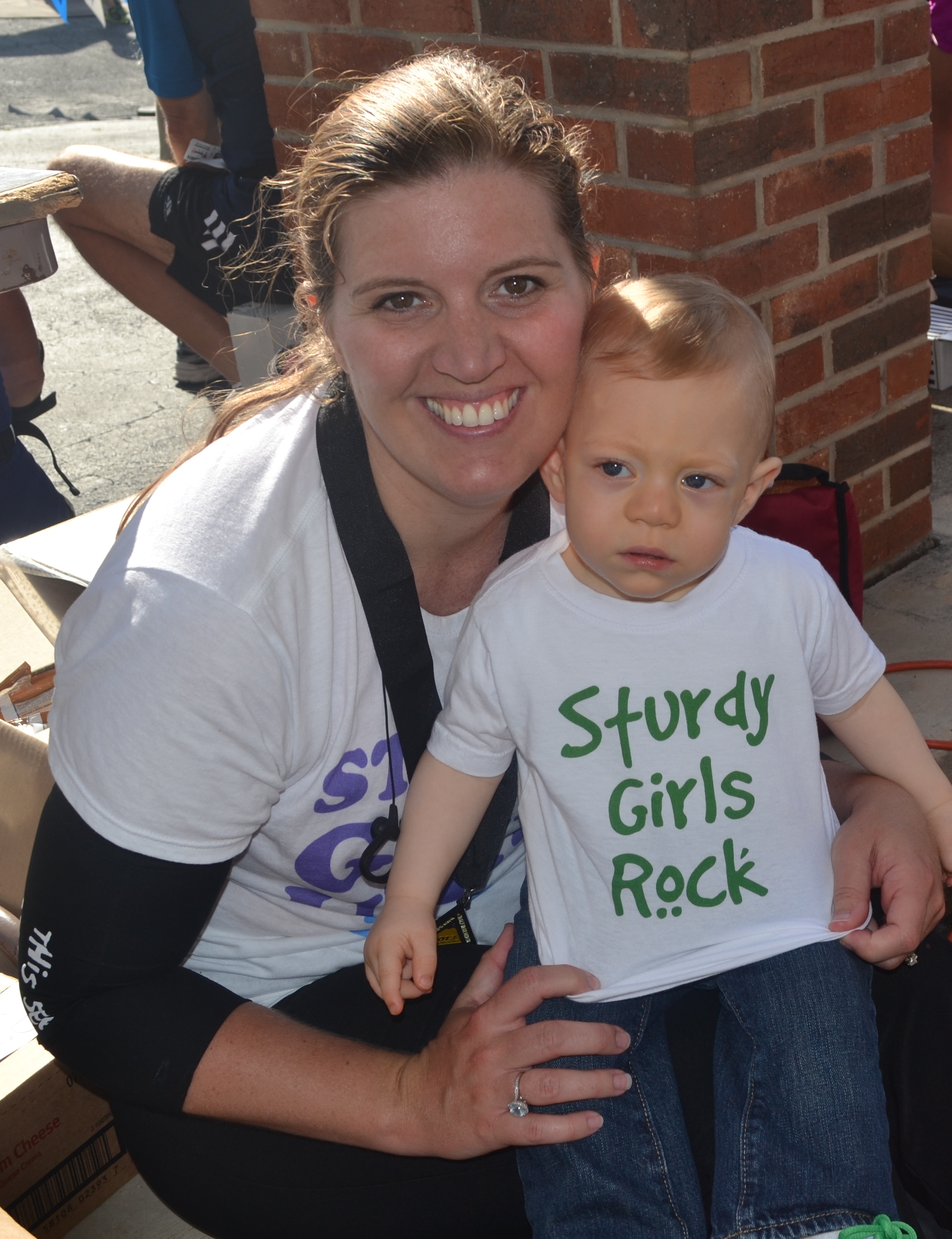 « Better Than Fireworks
Downton Abbey Made Me Lose My Parking Ticket »