Tucker has never been on a walk. He’s 8 months old and the only time he gets in the stroller is when we go to doctor appointments. When we brought him home, it was right in the heat of summer. The air quality was terrible and his lung doctor didn’t want us to have him outside, he was after all, already on oxygen to help him breathe. Dense heat and humidity would not have been good for his little lungs. So we waited. And it was hard. Before we had Tucker, I had imagined the long walks we would take-he would love them, I would happily stroll him, we would smile at each other, the sun beaming off his sweet face. A little breeze. Maybe a butterfly or two flittering (is that a word) along as we walked. Cue James Taylor, “In my mind, I’m goin’ to Carolina. Can’t you feel the sunshine?…” Yes. I sometimes daydream my life in movie scenes. And it would be perfect. Family walks…ahhhh.

So, I was overjoyed when we went to the lung doctor last month and I asked him if we could finally take Tucker for a walk and he said yes. This was when we were having those gorgeous 75 degree days. The doctor said as long as it was above 70 degrees and the air quality was good, we had our monitor, he was fine with it. Woo Hoo! My plan began. I logged on to Weather.com and looked for the most gorgeous possible day in the forecast. I picked out his outfit in my head. I told Darrin to charge the cameras. Tucker was going to LOVE the walk right? The poor guy hadn’t been out in the open air for more than 5 minutes. Ever. Maybe I could even write a sweet post about it.

The perfect afternoon arrived. We were armed with the cameras. I could almost hear the music playing. Tucker was going to LOVE his first walk! It would be monumental-all those days cooped in the NICU and then at home in the Tucker compound. He deserved this walk. I couldn’t wait for the smile that would surely cross his face from ear to ear..

Click here to see the happy walk: The Walk

Tucker. Walk. Not impressed. We made one sad little loop around our street and he was over it. Cried or squirmed for most of it. The sun was too bright for his eyes. He kept sneezing. There were no birds chirping. Definitely no butterflies. No James Taylor. And no sweet smiles between mother and son. Son was squinting and completely ticked off to be on a walk.

And so it was then, after our sad so-not-like-I-planned-it first walk that I got one of many rookie lessons in parenting. Wait a minute-do you mean to tell me that he won’t like everything I think he should like? Even when I set it up perfectly? I can’t make him like it? What? It was the perfect walk. And he wasn’t impressed. Not because he is a preemie. Not because he spent forever in the hospital. Just because. It just wasn’t his thing. Even though I sooooo wanted it to be. Huh.

Those of you reading this with kids older than 4 months old are shaking your head right now. “Rookie” has crossed your mind. You know my road ahead. Wanting him to do things, like things, be things and say things that I want him to instead of letting him be Tucker. My mom had to learn to do it. Darrin’s mom had to learn to do it. And they did it well-we are happy they did. Every mom and dad in the world has to learn to let their kid be. Just. Be.

I am at the starting line and I can already see that this lesson will be one of the hardest for me. But it will be the longest lasting for Tucker. God created him to be Tucker. Not mini Darrin (even though he sure made it seem that way with this kids face) and not a mini Heather. But a Tucker. A Tucker who likes what he likes. A Tucker who will play the sports he wants to play. Or not. He’ll be the Tucker who might not like live theater or (gasp) musicals. He’ll be the Tucker who quite possibly might not like sweets (say what?). He might be a Tucker who wants to play the ukulele instead of the lead guitar in a rock band. But for sure, we know this. He will be his own Tucker. Who doesn’t love walks.

We have great news from our doctor appointment this week. Tucker is finally back on the weight gain train! He’s up 8 oz in the last 2 weeks so the increased calories are working. He also got his first of 5 RSV shots. He’ll get another in 28 days. This won’t prevent him from getting RSV but it does help to hopefully keep him healthy. We had to postpone the neurology appointment for 2 weeks, so no other appointments this week. We have a lung doctor appointment next week and we’ll see how his monitor data looks. As far as we can tell, all his monitor alarms since last visit have been lead issues and not real bradys or apnea events-which is great news. If they download the data and he truly hasn’t had any events then we may be able to just have him on the monitor at night. Yay! So pray for good data!

From a development perspective he still seems to be tracking well. He’s rolling over both ways now. Laughs (be still my heart). He has started reaching for toys but needs some work on actually using his fingers (fine motor skills)-this should come in the next few weeks. He’s not sitting up unassisted but he’s close-we’ve still got a month or so until that milestone. We have an assessment with Early Intervention in 2 weeks so we’ll be able to see exactly how he’s doing developmentally. We feel very optimistic and are thankful to God for each milestone he hits. Thank you for praying specifically for this.

Hope you’re having a great week. And P.S. we did try the walk again (because I don’t give up easily) and while Tucker still didn’t LOVE it, we had a better time and he fell asleep halfway through. I’m taking this as success.

“But I say, walk by the Spirit, and you will not gratify the desires of the flesh.” Galatians 5:16 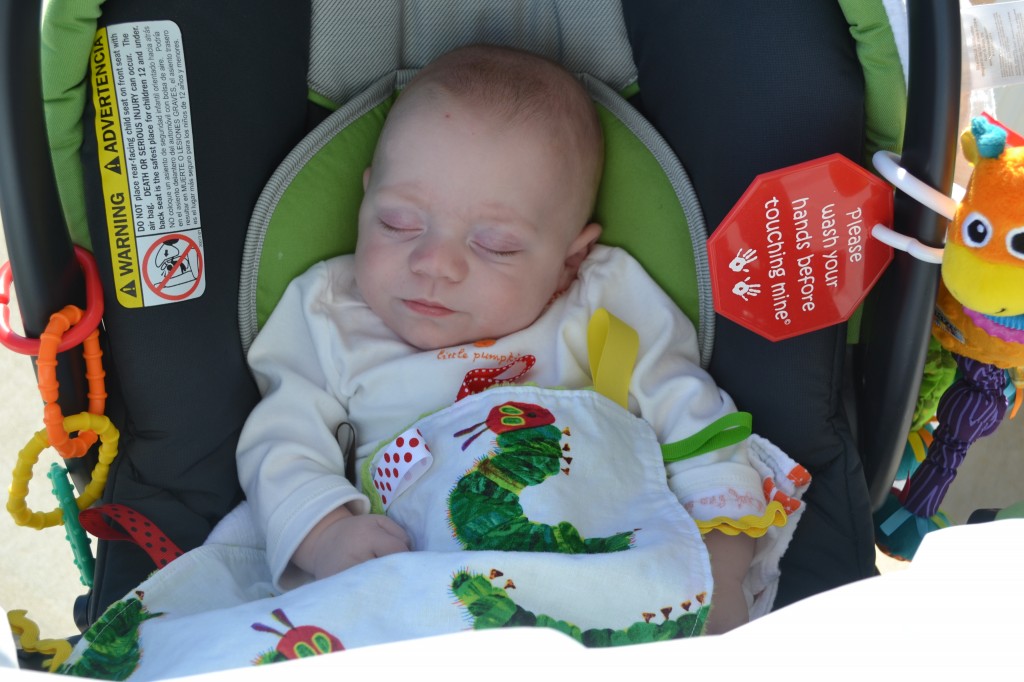 I still don’t like walks. But if you insist, then at least I’ll get a nap in. Oh, and I don’t like James Taylor either.