We have some friends who throw a Halloween party every year. Sweets. Kids in adorable costumes. Chili. These people throw a good party-you don’t want to miss it. And you don’t want to miss the dessert table. 2 years ago, Darrin and I went to the party armed with some Nutter Butter cookies dipped in white chocolate to look like ghosts (clever yes?)  and a cupcake carrier full of peanut butter chocolate cupcakes (no. that part really isn’t integral to my story but I always want to know, in detail, about the sweets and I figure you do too).  The party was loud and fun-kids running around on sugar highs, sneaking to the sweets table over and over again. The adults negotiating with them on exactly how many Fun Size Twix bars were enough to consume for one night. We had a good time-passed around a couple of mini tigers and princesses and pirates. Took pictures of some of the first timers.  Ate some spicy chili. Told and laughed at some pretty hilarious stories. As expected, it was a good party.

As we left, we walked to our car, passing some late trick or treaters on the way. We fell silent as we opened the door, put our stuff in the back and buckled our seatbelts. Before we got out of the neighborhood, the tears started. Big. Silent. Tears. I looked at Darrin and he said what was on my mind. “We really are the only ones without kids now aren’t we?”

Yes. We were. We had gone through our first miscarriage 5 months earlier, after more than a year of trying. We still weren’t pregnant. And we were approaching the due date for the baby that we lost. We were both emotionally drained from the circumstance we had been in now for almost 2 years. Hoping, every month, for 2 lines instead of one. So we cried a little bit. Drove to a Dairy Queen for a pumpkin pie blizzard (they’re seasonal, go get one. Today.) And we talked about One Day. One day when we would bring a mini frog or lion or fairy to the party. One day when we would be handed back our kid because he was crying and over the whole wearing a hot-slightly-too-big-velcroed-under-his-chin hat from a costume. One day, when I would tell our kid to eat as many Milky Ways as he wanted while Darrin tried to talk him into keeping it under 10.

We didn’t know when that day would come. And we didn’t know how we would get there. And if we had known, we might have tried to prepare ourselves a little. Although no preparation would have been enough. But we told ourselves that it would happen. Eventually. And it did. Yesterday, the One Day that we talked about that night over Pumpkin Pie Blizzards arrived. We weren’t able to take Tucker out trick-or-treating and we couldn’t take him to any Halloween parties because we’re 30 days into our isolation. BUT. You better believe that boy had a costume. And we took a gazillion pictures. And he slept in “My First Halloween” pjs. And I posted his adorable mug all over Facebook. Because I didn’t want to pass up the opportunity to commemorate our One Day.  The One Day that all our friends at that Halloween party had prayed for us to have.

Halloween is hard if you’re struggling to get and stay pregnant. It is a baby/kid holiday. I remember one Halloween, I didn’t log on to Facebook for a week just so I would miss the adorable baby costume pictures that were sure to be posted.  And kids ARE cute in their costumes and of course you should post them so the world can see just how adorable a mini Sushi Roll costume can be (seriously-that is originality and adorable all rolled up into one. Pun intended). Enjoy every minute of Halloween with your little ghosts and pumpkins. And let them eat 10 Milky Ways. Please too, pray for your friends, who were in that hard place yesterday. Who smiled happily at the trick or treaters who came to their door but cried in private because they are longing for their One Day. Sometimes Halloween reminds them of the one thing they want more than anything, but they don’t have yet. Pray that God would give them a little pumpkin to dress up soon.

Last night, I thanked God for giving us a “yes” after so long.  So many of you prayed long and hard for that “yes” too-thank you (and thank Him!).

Tucker has had a good week. We saw the GI doctor last week about his lack of weight gain and the doctor wasn’t overly concerned yet. He wanted us to continue fortifying his feeds to get up to 24 calories per ounce (instead of 20-22). He wants to see us back in a month to see if he has gained at a better rate. So please pray that Tucker would gain. This week actually also marks the first week since we’ve been home from the hospital that we don’t have a doctor’s appointment. Holy Wow! We do however, have two next week. He’ll get his first RSV shot on Monday and on Tuesday, we’ll see for the first time, the pediatric neurologist. It’s also time for him to see the Early Intervention case worker to check on his milestones. We have a new one to report. Over the weekend Tucker taught himself how to roll from his back to his belly! The next milestone we need him to hit is sitting without assistance. His head control is pretty good for a micro preemie but he still can’t hold himself up without falling forward when he sits. So please pray for this next milestone. Its the key to balance, crawling, walking etc.

We hope you had a great Halloween. Even though we were stuck indoors, we had a great time dressing Tucker up and trying to get him to make faces for the camera.

Here are some pics from Halloween, 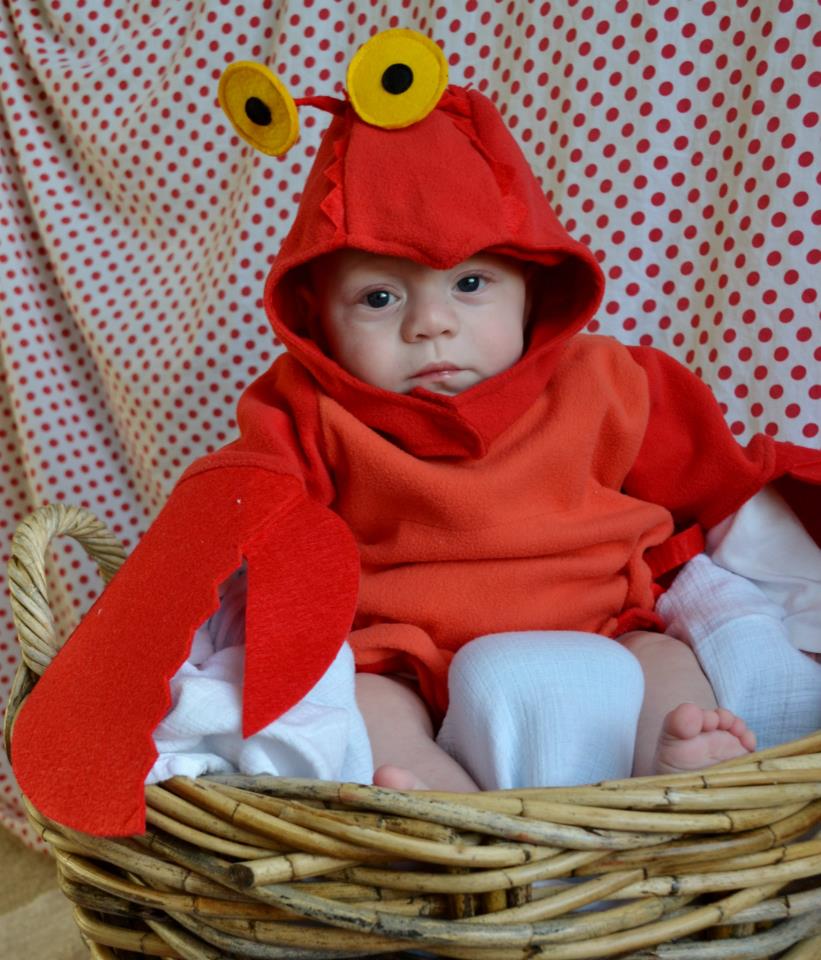 And I thought the bumble bee hat was bad. 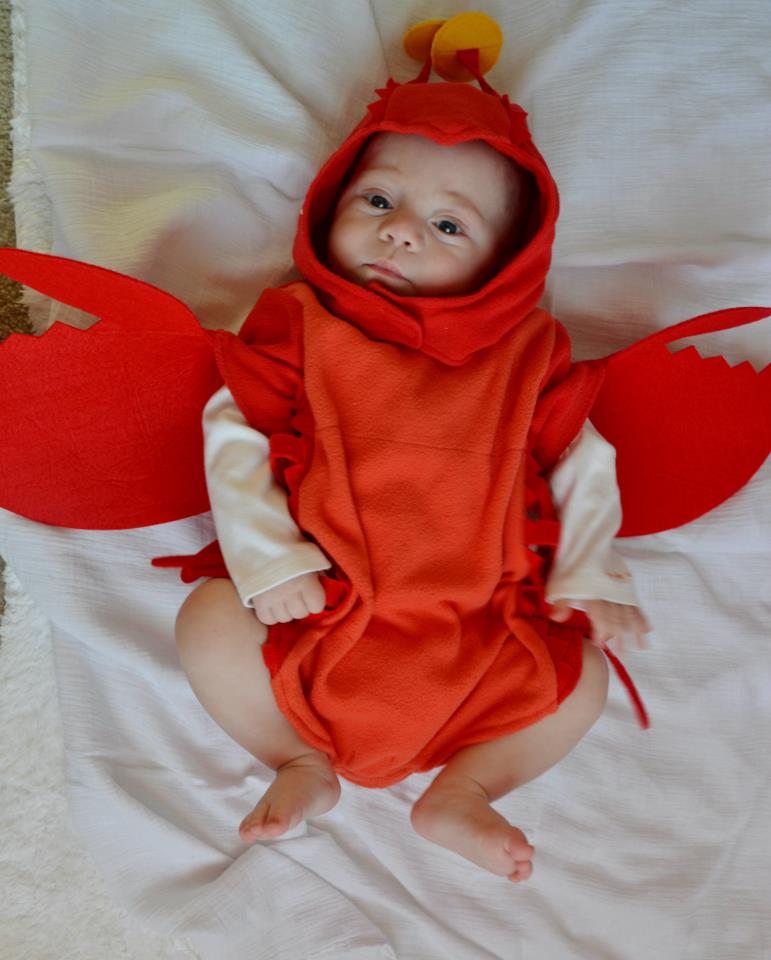 WHAT is she doing? That is not funny. I am not going to laugh. 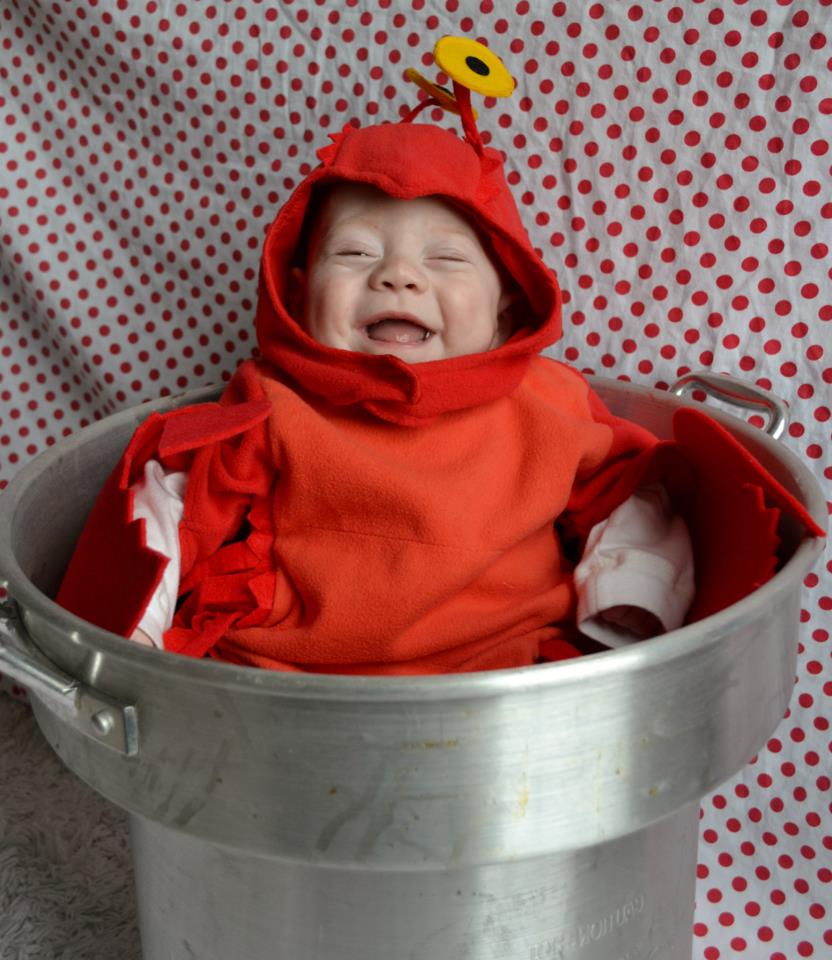 The only lobster I know, happy to be in a pot. 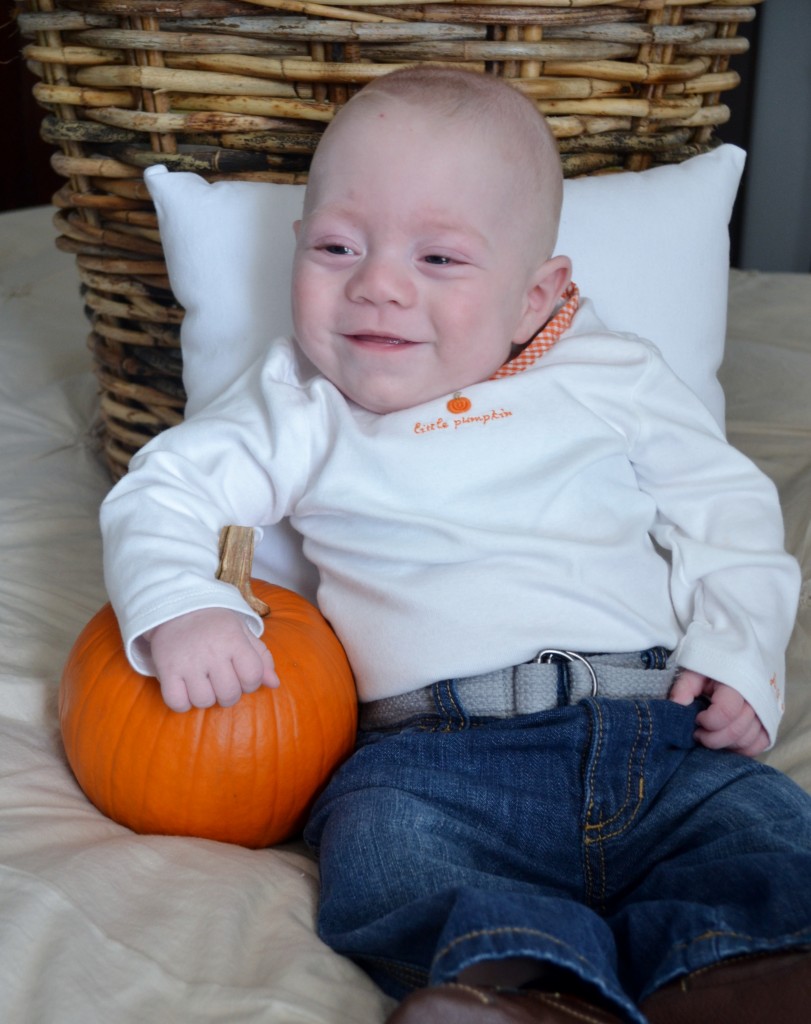 I don’t leave the house. But I’ve got some sweet loafers. 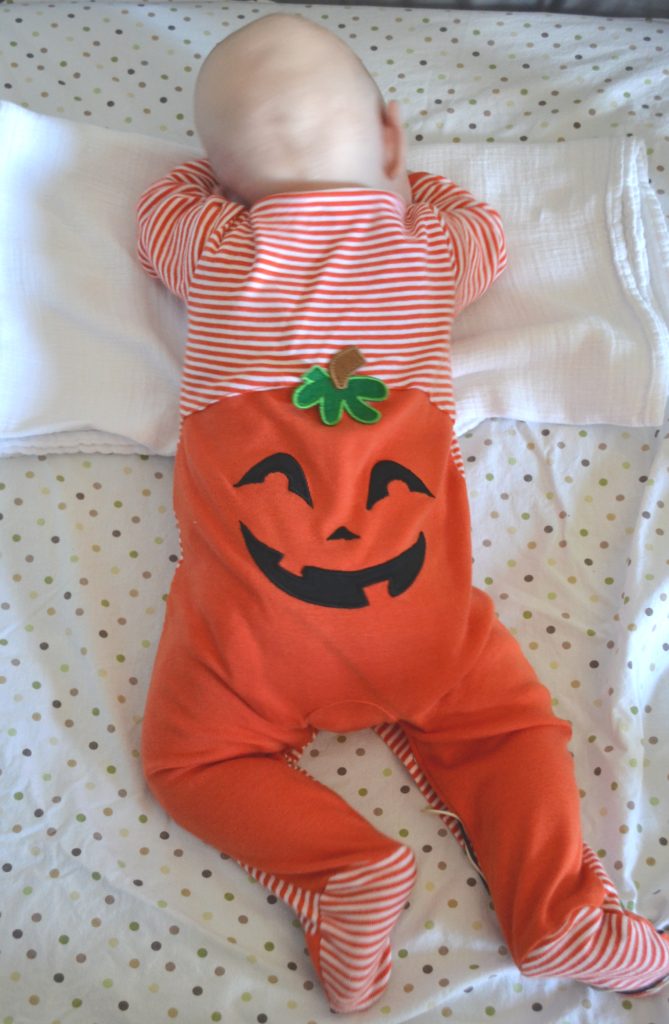 My pumpkin pj’s. Thank you Kayla 🙂

« Make a Joyful Noise
A Rookie Lesson in the Walk »