January 9th. As of today, we’ve officially spent as much time at home as we spent in the hospital. Wow. The first 5 months were in slow motion. I remember thinking that first week in the NICU how LONG we had to go and how FAR Tucker needed to come. These last 5 months? Flown by. And in these 5 months, Tucker has grown himself a big. fat. personality.

He is very curious. About things. About what we’re doing. About my phone. And the computer. I love when we hear Tucker stirring in the morning. We look over and see his little head popped up, pushed up on his arms as far as he can go, straining to see us, and the day ahead. His blue eyes barely peeking over the side of the pack n play. (yes, still in our room-don’t judge). It is exactly what I couldn’t let myself imagine 7-8-9 months ago when his little blue eyes were fused shut and I was looking at him through plexi glass. I hurried time along in those days. I wanted him to grow. Develop. Get outta there with as little emotional and physical scarring as possible. I don’t hurry the days away now.

How far we’ve all come. Here are some reflections from our 5 months at home:

We had a good visit at the hearing exam. They did 3 tests. Two were “functional” tests which checked Tucker’s inner ear and middle ear to make sure they were functionally doing what they should-and they are. Then they did another test that was more behavioral-we sat in a booth with two speakers and TV’s on either side of the room. Then, the doctor (outside the booth, we couldn’t see) would play different sounds in one of the two speakers along with a picture on the screen. I held him on my lap and didn’t speak or react at all. The object was for Tucker to hear the sound and look in the direction from which the sound came. The whole test took about 10 minutes or so. He did well with this except for the more hushed, quiet sounds, which were toward the end. The doctor said this could be because at that point, he was over it and more interested in other things (like his feet-good gracious, he’s obsessed) or he may actually not have heard the sounds.

We’ll go back in 3 months and re-do the test, by then, he can hopefully tolerate earphones and it will be easier to analyze. If you remember from an earlier post, he has a few risk factors for hearing loss (some of the meds he took in the NICU, the fact that he was on the vent and just his severe prematurity). But, the doctor was encouraged by what she saw, so that is good news. He’ll get these exams until he’s about 3 years old.

We still miss you and we have a few prayer requests:

“Before they call I will answer; while they are yet speaking I will hear.” Isaiah 25:64 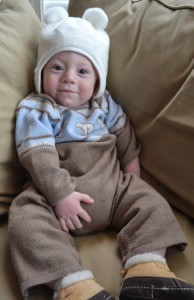 I am embracing the hats. 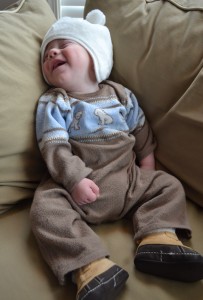 You think I’m taking a nap? 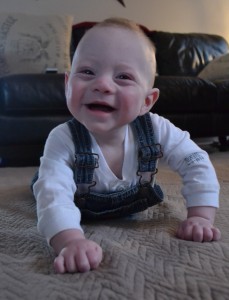 Overalls and a smile. All a boy needs.

« Here We Go A Caroling
Putting the Mile in Milestones »