It was around 4:00 in the afternoon. I am most certain I had just asked Darrin to fetch me some Oreos or Famous Amos cookies or something sweet from the cafeteria. My theory was the more calories I could consume, the bigger this baby boy would be if he did, indeed, arrive early. And I was taking that theory seriously. We were probably watching Sports Center-what else do you watch at 4:00 in the afternoon from the limited hospital channels? Bedrest was starting to get to me. But I was doing everything I could to keep this little guy to stay put for many more weeks. Months actually. The hospital doc must’ve known that wasn’t going to happen. He had ordered a consult with neonatology.

He walked in and introduced himself, Dr Howell. He had kind eyes behind his glasses and he spoke with a gentle cadence, even though the numbers and statistics that were coming out of his mouth were alarming. And they were hitting us like a ton of bricks. 56% chance of survival. 67% chance of moderate to severe disability. High risk of developmental delays. At least 4 months in the NICU. Increased risks for…you name it. Milestones.

He told us they were one of the best NICU’s in the Southeast and they have great percentages for babies that go home from their NICU. But. Their biggest challenge, the hardest cases, the ones with the worst outcomes? The ones with the statistics he just mentioned? Well, they are the babies born before 27 weeks. So as he left, he told us, his hope was that I would make it at least to that 27-28 week mark.  My body didn’t care. And didn’t listen. As you know, Tucker arrived a few days later at 24 weeks 1 day. We would come to know Dr Howell’s team well over the course of the next 5 months. And we would come to understand the importance of… milestones.

As we navigated what it meant to have a 24 weeker, a micro preemie (a baby born before 26 weeks), we had a million questions. Those first months, the questions were all focused on one thing-would he live? As Tucker progressed and as we got closer to a discharge date, our questions turned more toward Tucker’s long term prognosis. I thought about it-all the time. Will he walk? Will he talk?  Laugh? Communicate? Will he Eat? Hear? Will he be able to learn? How has all of this-this severe interruption to his development in utero- affected him? Emotionally. Physically. Developmentally. We learned very quickly that neonatologists, nurses, specialists, pediatricians….they all answered every one of those “Will he…?” questions the same way:

“We don’t know. It’s all about the milestones.”.

The truth is, just the fact that they are born so extremely early puts micro preemies in a very high risk factor group for a boat full of development delays. Depending on how rocky the NICU stay is (surgeries, complications, infections, time on the ventilator, meds they took, brain bleeds, etc. etc. etc.) the higher the risk for more pronounced delays. And the honesty is, the likelihood that a baby born before 26 weeks would leave the NICU without 3-4 (or many more) of those things happening is zero. But.  Luckily these little scrappy micro rock stars don’t care about risk factors or stats.  They do things every single day that amaze the therapists. Refute the studies. Defy the statistics.

So. I say all of this to say, milestones? They’re a big deal. A really big deal.

Most of these little guys and gals get therapy on a weekly basis. Speech therapy, physical therapy, occupational therapy. The therapists are great and they push feisty micros to do things they don’t always want to do. But, you know who does some of the heaviest lifting? The mamas. I’ve met some incredible “micro mamas” as I affectionately call them. Most of them I’ve only met face to face once, in some cases never. But we follow each other’s stories through blogs and facebook. Many of them have put careers on hold to work with their kiddos on development. Because researching therapy takes time. Taking them to therapy every week (several times a week) takes time. Working with their baby on all the things they learned in therapy-takes time. Sorting through the paperwork and fighting insurance companies to help cover the cost of therapy-takes time. These moms live, breathe, sweat, research and pray incessantly for…milestones.

Rolling over. Sitting up. Eating. Crawling. Talking. Walking. These things don’t always come easy for micro preemies. So hitting each of them? After months and months of working at it? An incredibly big deal.

Noah was born at 25 weeks and spent, like Tucker, 150 days in the NICU. While in the NICU, Noah had several surgeries, fought off numerous infections, went on/off the ventilator and other breathing support a few different times. His journey through the NICU was a familiar, rocky, emotionally draining roller coaster ride. Noah is now 19 months old.  And he is obscenely cute. No for real, like A-dor-able. And I’m told a fierce Clemson fan. His mama Jenny and dad, Gary work with him every single day on development-he goes to different therapy weekly and works on eating, sitting, talking and now… Crawling 🙂

Jenny is one of the mamas that I described above. She fights for Noah and she and Gary have been praying fervently every day for Noah to start crawling. For months.  And like the rockstar that he is, Noah rocked the crawl last week for the first time. I would love for you to watch the video of his first crawl (I asked his mom if it was ok to share). But what I want you to pay attention to is Jenny. She is behind the camera. Her breath catches-you know the way. In the way that you can’t stop. In the way that exhales in and out the miles of praying, hoping, coaxing and willing. In the way that she can’t help as she sees Noah hit that milestone they’ve been wanting for so long. The milestone that means everything. The one that crosses her and Gary’s mind several times a day. “Will he do it?” “When, Lord?” “Please, soon.”  I catch my breath every time I watch it. I love it.

We have no idea what therapy Tucker might need in the future. We have many more months and years ahead of watching for milestones and staying on top of development and potential therapy. We’re watching him for speech right now as he’s not quite where he should be even for his adjusted age. So, I don’t know if, or when we might need to work with him on any developmental delays.  But I am thankful there are those who have done it before me. Not only preemie moms, but any mom or dad who has worked with their child in hours and hours of therapy to reach that super important milestone. I have seen the preemie perspective for the last 10 months, but there are so many families preemie and otherwise that work tirelessly to help their kids hit milestones that didn’t come as easily as they hoped. They do it with grace, fortitude and gratefulness to God. I’ve watched you and read about your triumphs. This post is just to say-you rock. And so do your kids.

And while we’re talking milestones…Tucker has one to share as well. Our boy turned 10 months old last week and this weekend he did this:

He can’t quite sit unattended yet, he’ll fall over  if he gets too far off balance, but we’re very happy with this milestone! He also officially graduated from his hospital issued apnea/brady monitor. They picked it up Monday. He wore is first zip up pjs this week (we had to use button up with the monitor so the wires could come out the bottom). We hope you’ve had a great week. I had a birthday over the weekend and along with Tucker giving me his present of sitting up, I also got visits from my home girls Liz and Susan who I rarely get to see while we’re in isolation and I’ve missed terribly.  AND I got a piece of takeout 7 layer chocolate cake from Mickey and Mooch. So. I totally scored.

Here are some prayer requests:

” Brothers and sisters, I do not consider myself yet to have taken hold of it. But one thing I do: Forgetting what is behind and straining toward what is ahead, I press on toward the goal to win the prize for which God has called me heavenward in Christ Jesus.” Philippians 3:13-14 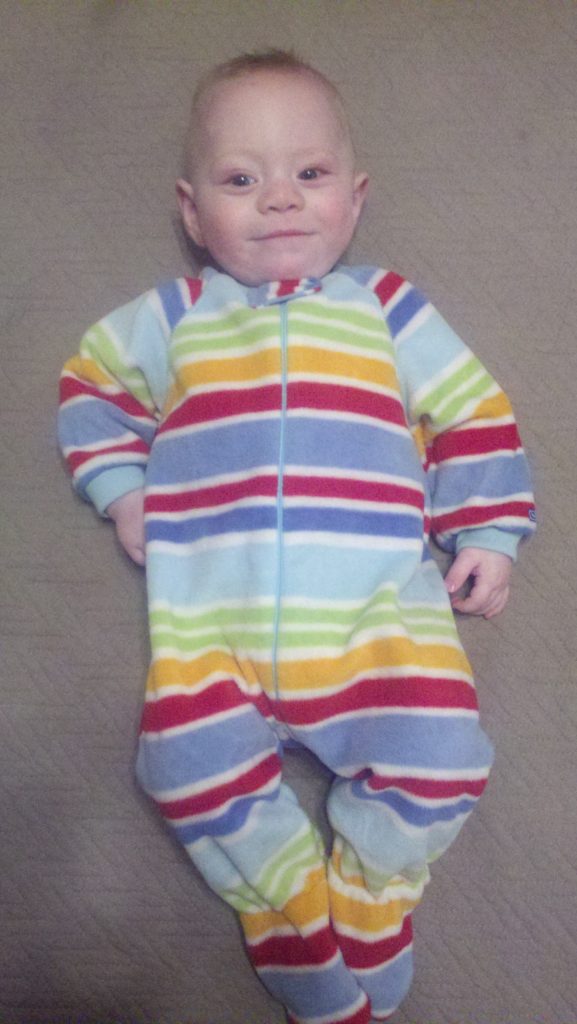 Zipper pjs? Must mean one thing. No more monitor!